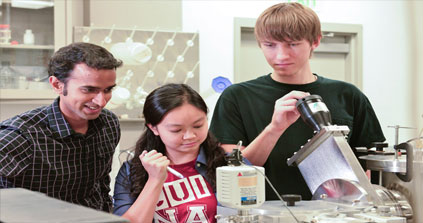 A team of scientists at Stanford University, that includes an Indian origin researcher, has discovered how to make the shiny upper metal contact ‘invisible’ to light, thereby funnelling light directly into the cell.

Their findings could lead to a new paradigm in the design and fabrication of solar cells.

In most solar cells, the upper contact consists of a metal wire grid that carries electricity to or from the device. But these shiny wires also prevent sunlight from reaching the semiconductor.

“Using nanotechnology, we have developed a novel way to make the upper metal contact nearly invisible to incoming light,” said study lead author Vijay Narasimhan, who conducted the work as a graduate student at Stanford.

“The more metal you have on the surface, the more light you block. That light is then lost and cannot be converted to electricity,” explained study co-author Yi Cui, an associate professor of materials science and engineering.

The solution: Create nanosized pillars of silicon that “tower” above the metal surface and redirect the sunlight before it hits the metallic surface.

The scientists immersed silicon and a perforated gold film together in a solution of hydrofluoric acid and hydrogen peroxide.

The gold film immediately began sinking into the silicon substrate, and silicon nanopillars began popping up through the holes in the film.

Within seconds, the shiny gold surface turned dark red. This dramatic colour change was a clear indication that the metal was no longer reflecting light.

“As soon as the silicon nanopillars began to emerge, they started funnelling light around the metal grid and into the silicon substrate underneath,” Narasimhan explained.

The findings were published in the journal ACS Nano.