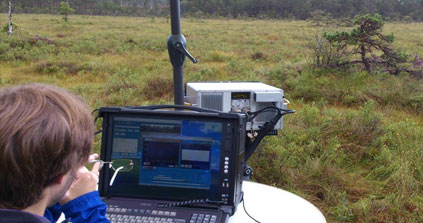 Scientists have developed a highly sensitive camera that can photograph and film methane in the air, providing a new way to measure and monitor greenhouse gases.

There are several questions surrounding the powerful greenhouse gas methane. Its rapid but irregular increase in the atmosphere has puzzled researchers.

There is also a high degree of uncertainty with regard to the sources and sinks of methane in the landscape.

The new camera developed by Linkoping University and Stockholm University in Sweden can help to address these issues.

“The camera is very sensitive, which means that the methane is both visible and measurable close to ground level, with much higher resolution than previously. Being able to measure on a small scale is crucial,” said Magnus Galfalk, Assistant Professor at the Linkoping University, who led the study.

The advanced hyperspectral infrared camera weighs 35 kilogrammes and measures 50x45x25 centimetres. It is optimised to measure the same radiation that methane absorbs and which makes methane such a powerful greenhouse gas.

The camera can be used to measure emissions from many environments including sewage sludge deposits, combustion processes, animal husbandry and lakes.

For each pixel in the image the camera records a high-resolution spectrum, which makes it possible to quantify the methane separately from the other gases.

“This gives us new possibilities for mapping and monitoring methane sources and sinks, and it will help us understand how methane emissions are regulated and how we can reduce emissions,” said principal investigator David Bastviken, professor at Linkoping University.

“So far the camera has been used from the ground and now we’re working to make it airborne for more large-scale methane mapping,” said Bastviken.

The study was published in the journal Nature Climate Change.