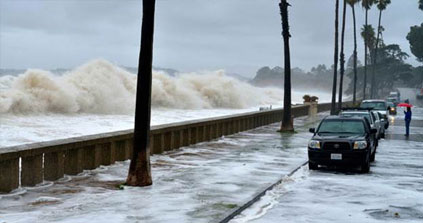 Global mean sea levels are projected to gradually rise in response to greenhouse warming. However, on shorter time scales, modes of natural climate variability in the Pacific, such as the El Niño–Southern Oscillation (ENSO), can affect regional sea level variability and extremes, with considerable impacts on coastal ecosystems and island nations.

How these shorter-term sea level fluctuations will change in association with a projected increase in extreme El Niño and its atmospheric variability remains unknown.

The higher waters of El Niño could increase flooding challenges of rising sea levels, but low sea levels may not be better for the environment. When the sea level drops dramatically it dries out shallow marine environments. In South Pacific Islands this could kill large amounts of coral, leaving a foul smell. These acrid tides are called taimasa by Samoans.

At the same time, sea levels rise in the eastern Pacific – especially along the equator, where anomalies exceeding 35 cm have been recorded around the Galápagos Islands stressing coastal ecosystems by sea level high stands. This Pacific-wide sea level seesaw generally reverses during La Niña, although the anomalies rarely exceed 10 cm and coastal impacts are typically less severe.

El Niño typically happens every two to seven years, but with increasing frequency these regions will have less time to recover.

Such sea level extremes are caused by wind-driven, massive zonal and meridional shifts of the tropical Pacific thermocline, associated with ENSO. During El Niño, weak equatorial trade winds cause the thermocline to shoal in the tropical western Pacific and deepen to the east, producing a zonal sea level pattern that mirrors these subsurface changes.

The meridional sea level pattern has recently been linked to near-equatorial collapses of the South Pacific Convergence Zone. These so-called zonal SPCZ events and the associated wind stress anomalies that force oceanic Ekman suction and cause sea level drops prolong the negative effects of Taimasa.

Recent modeling studies project an increase in the number of zonal SPCZ events, as well as extreme El Niño and La Niña events, in response to greenhouse warming.

“The possibility of more frequent flooding in some areas and sea level drops in others would have severe consequences for the vulnerable coastlines of Pacific islands,” said Matthew Widlansky, researcher at the University of Hawai’i at Mānoa, in a news release.

The changes are most pronounced in the region centered around the date line in the equatorial Pacific, where the observed sea level variability, represented here by the European Centre for Medium Range Weather Forecasts operational ORA-S4, is less than in either the western or the eastern Pacific.

Past sea level extremes here followed strong El Niño events and are associated with winds accompanying the zonal collapse of the SPCZ. These future changes are not as pronounced in the CGCMs that fail to simulate the nonlinear characteristics of Pacific rainfall variability.

“Our results are consistent with previous findings that showed the atmospheric effects of both El Niño and La Niña are likely to become stronger and more common in a future warmer climate,” added Wenju Cai, researcher at CSIRO in Australia.

Meteorologists already predicted that the El Niño predicted to hit the US west coast late this year could last longer than usual.