Google and NASA Team Up on Quantum Computer

Home » Future » Google and NASA Team Up on Quantum Computer 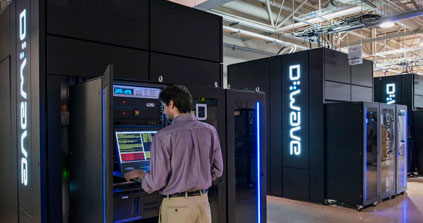 The next generation of computers is a few years off, but it’s pretty damn cool.

It’s like no computer you’ve ever seen, nor are you likely to ever own. It promises speed and the ability to tackle problems ordinary computers can’t handle.

The machine is the D-Wave 2X, and the only working model outside the company is in the Quantum Artificial Intelligence Lab. A joint project between Google, NASA, and the Universities Space Research Association, the lab will test-drive the 2X on some sticky problems in high-powered computing.

The 2X is a type of quantum computer, which means it uses devices that exploit quantum physics to replace transistors and other components of ordinary computers. The quantum nature of the inner workings in theory should make the computer solve problems much faster than anything else available, making it useful for a wide range of applications. While there are no fully quantum computers out yet, the 2X is the closest yet—assuming it works as advertised.

All ordinary computers—laptops, desktops, tablets, phones, e-readers, smartwatches, or whatever – are based on semiconductors, materials that conduct electricity reluctantly. That reluctance makes it easy to control the flow of power using devices like transistors, so that current is either flowing or not: represented by the numbers “1” for “on” or “0” for “off.” Combining the current through different parts of circuits allows computers to perform simple mathematical operations using just those two numbers. The power of a computer lies in doing lots and lots and lots of computations, faster than we perceive. (Note to experts: this is a simplified explanation. Don’t try this at home, kids!)

Quantum computers also use just two numbers, but instead of manipulating electric current, they manipulate “quantum states.” A quantum state contains a kind of list of all the possible configurations a particle (or other microscopic system) can have: its position, speed, energy, spin, and so forth. When two quantum systems interact with each other, or we perform a measurement in the lab, the quantum state describes how likely the outcome of that interaction or measurement was.

Until the measurement, though, the state is undetermined. For a quantum computer, a “quantum bit” or “qubit” could be either 0 or 1, but we don’t know until the computer reads it out in some way. One qubit, just like one bit in a normal computer, is pretty useless. However, if you have lots of qubits, you can perform many calculations simultaneously. Theoretically, a quantum computer could solve a given problem every possible way, including finding all the wrong solutions, in the amount of time it would take a normal computer to find a single solution to the same problem. That makes quantum computers useful for stuff like decryption and finding the optimal approach to performing searches.

But “theoretically” is the key word. Nobody has yet built a true quantum computer, and the D-Wave 2X is no exception. (More about what it is shortly.) One difficulty is that quantum states are delicate things: interactions between particles behave exactly the same way a measurement does, altering the state and screwing up whatever calculation we were trying to do. A larger problem is that all qubits in the computer need to be entangled with each other, meaning that their quantum states are linked up: a measurement on one qubit restricts the possible outcome of similar measurements on all the others. The more qubits, the harder the entanglement becomes.

To minimize such snafus, the 2X and similar devices run at very cold temperatures, to keep ambient vibrations and other noise to a minimum. We’re talking very cold: the D-Wave 2X at Google’s Quantum Artificial Intelligence Lab has to run at 0.015 degrees Celsius above absolute zero, or 15 millikelvins. (For comparison, the ambient temperature of outer space is 2.7 degrees above absolute zero.) Even with that, the 2X isn’t the ideal quantum computer described by theory – D-Wave describes it as a “quantum optimizer” instead – and some people are still skeptical it’s doing fully quantum calculations.

The D-Wave 2X uses over 1000 superconducting qubits, linked in a circuit resembling ordinary computer processors. Rather than trying to solve all the difficulties of quantum computing in one go, the 2X is an “adiabatic quantum optimizer.” In principle, you feed it the mathematical representation of the problem you want to solve, and the qubits adjust to find the quantum configuration that corresponds to the solution. This is a standard solution technique called “annealing,” but in a normal computer the configuration is simulated, rather than worked out using actual quantum systems. In my physics research days, I wrote programs like this on ordinary computers.

It’s a fascinating idea, and one that looks very promising. However, there’s some disagreement over whether D-Wave’s machines are working as advertised. Ordinary benchmarks used to measure a computer’s speed haven’t found a noticeable improvement from going quantum. D-Wave engineers say that we should be using a different set of benchmarks instead, since the way the 2X processes is fundamentally different.

The real proof is in the results. If the 2X or other quantum computers can solve problems that are either too hard or too slow on ordinary computers, then we’ll call it a victory for the next generation of computers. And that is pretty damn cool.