Dark energy could signal collapse of the universe

Home » Future » Dark energy could signal collapse of the universe 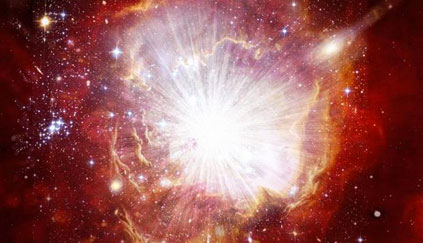 Talk about a cure that’s worse than the disease. A proposed quantum field can account for the universe’s ever-quickening expansion, but it would also trigger the universe’s death in a catastrophic collapse.

In 1998, astronomers discovered that the universe has been ballooning at ever-faster rates for the past few billion years. They dubbed the mysterious entity responsible “dark energy” and have been striving to identify it ever since.

The simplest explanation is that particles briefly bubbling into and out of existence imbue every cupful of space with the energy needed to accelerate the universe’s growth. But this quantum stew, known as vacuum energy, is no panacea.

Energy, like matter, causes space to curve, according to Einstein’s general theory of relativity. Calculations suggest that this vacuum energy is so strong that it would make the universe curve in on itself until it spans less than the distance from Earth to the moon – and clearly it’s bigger.

To get around this discrepancy, Nemanja Kaloper of the University of California, Davis, and Antonio Padilla of the University of Nottingham in the UK attempted to cancel out the curvature caused by the quantum instabilities by modifying the equations of general relativity on the largest scale possible: the whole of space-time.

Last year, they found a way to do this that cancels out nearly all of the vacuum energy, leaving just enough to explain the acceleration we observe (Physical Review Letters, doi.org/273). But their method requires space-time to be finite, which implies that cosmic expansion must eventually stop and reverse, causing time to end when the universe collapses. “The universe returns back to where it banged from,” says Kaloper.

Now the researchers have proposed a trigger for that collapse: a new quantum field that permeates the universe. The field’s energy would drop slowly over time, eventually becoming negative and setting off the cosmos’s contraction. Before the contraction begins, however, the field would cause the universe’s initial expansion to accelerate, just as it is doing now. “It’s as if the dark energy is the harbinger of doom,” says Padilla (Physical Review Letters, doi.org/274).

“It’s an interesting approach, but it’s still incomplete,” says Asimina Arvanitakiof the Perimeter Institute in Waterloo, Canada. “What is the underlying theory that tells you that this is how you should write down your equations?”

The researchers are now working on a generalisation of their proposal that should help address these concerns, says Kaloper. They are also calculating when the universe’s contraction may begin, though they suspect it wouldn’t start for another few tens of billions of years, says Padilla.

“We’re pretty safe,” says Arvanitaki. “I’m not going to lose any sleep over it.”