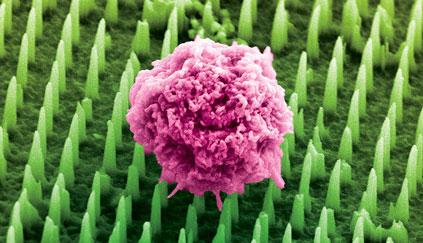 No need to be scared of these needles. The nanoscale spikes make up a bed of nails that should help, not hurt. Designed to reprogram cells, the needles are injecting genetic material into the heart of a human cell, shown in pink.

The idea is to use them to help generate new blood vessels to connect transplanted or artificial organs to the rest of the body.

Developed by Ciro Chiappini at Imperial College London and his team, the needles are about 50 nanometres wide. They are porous and can be loaded with DNA or RNA and pressed into a layer of cells to precisely deliver their contents into a cell’s nucleus, where DNA is stored.

Chiappini’s team has already filled the needles with copies of a gene that can promote the growth of new blood cells. They effectively injected the gene right into mouse muscle cell nuclei, and over the following days, saw the network of blood vessels around the muscles grow.

Because the needles are made of biodegradable silicon, which dissolves in the body in just a few days, they could be safely left behind to degrade after their job is done.