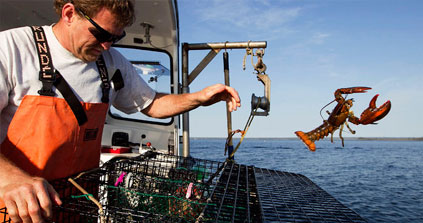 Up in Maine, lobsters are thriving. The Atlantic States Marine Fisheries Commission reported last month that stocks there reached a record high.

Down the coast, however, the story is different. In southern New England, lobster stocks have plummeted to the lowest levels ever recorded, putting many lobstermen out of business.

Lobster populations rise and fall for many reasons. But in its new report, the commission singled out one factor that is probably driving the recent changes: The ocean is warming.

At the northern edge of the lobsters’ range, higher temperatures may be speeding up their metabolism, leading to the population boom. But at the southern edge of the range, the waters may be getting too warm, putting the animals under extreme stress.

New England’s lobsters are part of a planetwide trend. The oceans have been warming in recent decades, largely because of heat-trapping greenhouse gases humans have put in the atmosphere. Many marine species around the world have responded, moving to more comfortable waters.

According to a 2013 study, marine species are pushing their range boundaries poleward, away from the Equator, at an average speed of 4.5 miles a year. That’s 10 times as fast as the speed at which species on land are moving.

To understand how rising temperatures will change life in the ocean, scientists are developing computer models to figure out where various species will end up. At this point, the models are fairly simple, but the picture they are painting is stark.

Global warming is going to reshuffle ocean ecosystems on a scale not seen for millions of years. Marine biologists can’t yet say what these new habitats are going to be like.

“If you put a bunch of species in a blender, you’re not entirely sure what’s going to come out,” said Malin L. Pinsky, a marine biologist at Rutgers University.

The most ambitious effort yet to map the future of ocean life was published Aug. 31 by the journal Nature Climate Change. An international team of scientists analyzed the current ranges of nearly 13,000 species of fish, invertebrates and other marine organisms.

The researchers noted the warmest and coldest temperatures in which each species has been observed. If the future plays out like the past, the scientists reasoned, each species will probably move in order to stay in its “thermal niche.”

The journey will be easier for some animals than others, the study found. Some will be able to swim through open ocean to escape overheated waters. Others may find their paths blocked by landmasses or shallow seas.

The scientists also compared the projected biodiversity of each region of the ocean in 2100 with that seen today. The tropics will lose a substantial fraction of their species, the researchers found. And there won’t be any new species emigrating to the tropics to take their place.

As more species shift away from the Equator, they will move into new ecosystems closer to the poles. This migration will produce combinations of species without precedent in the last few million years.

Jennifer Sunday, a marine ecologist at the University of British Columbia who was not involved in the new study, said it represented an important advance in our understanding of the ocean’s future. “They’ve taken a big step in keeping track of which species are where,” she said.

She cautioned that there was still a lot that scientists are learning about how the ocean’s temperature influences its inhabitants. In a study she and her colleagues published in the September issue of Ecology Letters, they found that species with small ranges can survive in temperatures that vary greatly from those in their current habitats.

If these animals were constrained only by temperature, they might be found 1,000 miles or more beyond their current ranges. Instead, Dr. Sunday said, “they’re limited by habitat and competition and all these other things keeping them in small ranges.”

Jorge García Molinos, the lead author of the new study, agreed that projections about the future of the oceans would improve as scientists added more biological complexity. “Our model is good for a first-cut picture,” he said.

It is hard to predict what the influx of extra species to high-latitude regions of the ocean will do to those ecosystems. Some newly arrived species may be better adapted to warm waters, outcompeting native inhabitants. Others may go extinct. “It’s a game about winners and losers, I think,” Dr. Molinos said.

Dr. Pinsky, who was not involved in the study, also sees ominous signs for humanity in the research.

“Many species are moving away from the tropics, and that quite likely has food security implications,” he said. “Seafood in many of these countries is a very important source of nutrition. Climate change could leave a gaping hole in the oceans.”