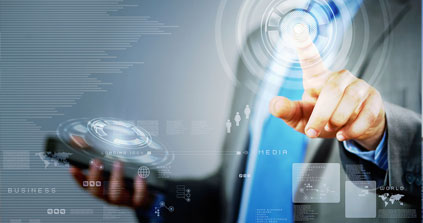 The march of progress in computing is a climb. Each big step forward is also a step up, so that communication is further away from the machine, more on human terms.

And each time, the number of people who can use computing increases dramatically. At first, programming languages were the medium of communication between man and machine. Fortran, the breakthrough computer language, was designed to resemble the algebraic formulas familiar to scientists and engineers — reasonably enough, since they were the only people anyone could imagine using the relative handful of giant calculating machines back then.

Today, billions of people roam the Internet from computer phones they hold in their hands. Dramatic advances in hardware, of course, are a big part of the explanation, notably the flywheel of technological dynamism known as Moore’s Law, celebrating the chip industry’s ability to double computing power every couple of years (there’s a debate about whether the pace is tailing off, but that’s another story).

Yet there is another force in the striking democratization of computing beyond hardware, one that is more subtle but still crucial. That is the steady stream of improvements in the design of computer products, mainly software, which have opened the door to new users by making computers easier to use. The term most used now is “user-interface design.” But that suggests a narrower, product focus than the field that stretches back several decades, called human-computer interaction, which embraces psychology, anthropology and other disciplines.

“I think human-computer interaction designs have had as much impact as Moore’s Law in bringing the web and mobile devices to the world,” said Ben Shneiderman, a professor at the University of Maryland, College Park.

To try to raise the profile of prominent people in the field, Mr. Shneiderman last week published a web site for what he calls “The Human-Computer Interaction Pioneers Project.” It is a personal project for Mr. Shneiderman, who founded Maryland’s Human-Computer Interaction Laboratory in 1983, and is an avid photographer. The web page for each of his pioneers includes a brief text description and photographs, often several, that Mr. Shneiderman has taken of the person, at professional conferences and elsewhere over the years.

He is starting with 45 subjects, and plans to add more. Some of the people featured are familiar names in computer history like Douglas Engelbart (computer mouse), Alan Kay (laptop) and Ted Nelson (hypertext). But many others are not. And going through the list, and talking to Mr. Shneiderman, it becomes clear how much the field has evolved over the years and its broad influence in business these days.

His list includes scientists like Sara Bly, who was early to move beyond lab settings to study how people actually use technology at work and at home, and Jennifer Preece, who has researched online communities and how design choices affect social behavior.

The best people in the field, Mr. Shneiderman said, possess “a deep knowledge of technology and a real sensitivity to human needs.”

Getting out in the field to see how people really use products and seeking to empathize with customers rather than merely exploit are becoming priorities in the tech industry and beyond. They are key ingredients in two of the most popular management trends today: lean start-up techniques and design thinking.

The latter is being embraced by Charles Phillips at Infor, a large business software company, and by Virginia M. Rometty at IBM. Design thinking is the theme of the September issue of The Harvard Business Review, with a collection of articles on the subject. One of Mr. Shneiderman’s human-computer interaction pioneers, Donald Norman, is also a prominent design-thinking consultant.

The A/B testing that is a common practice at major Internet companies like Facebook, Amazon and Google is a form of human-computer research. In A/B tests, different features or web-page layouts are presented to different groups of users — often samplings of millions at a time — and observing how they react.

Programming remains central to the profession of human-computer interaction. Mr. Shneiderman’s lifetime achievement award from the Association for Computing Machinery, the largest computing professional society, is for his work on “direct manipulation” software that helped enable hyperlinks and touchscreen keyboards. (He included himself among the 45 human-computer interaction pioneers.)

But the field, Mr. Shneiderman said, is once again headed further up, away from the machine. The goal of tomorrow’s software, he suggests, will be less on features on a web site or smartphone and more on design that encourages better outcomes for individuals and society in, say, education or health care.

“The future lies in these social designs,” he said. “Design to encourage trust, empathy and responsibility, while protecting privacy. That’s the next big thing.”