Study finds some fish can live in low-oxygen dead zones 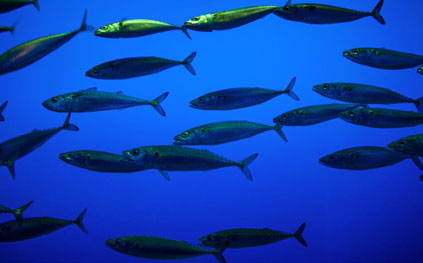 Scientists say they have found that some fish can survive in low-oxygen dead zones that are expanding in deep waters off the West Coast as the climate changes.

While the overall number and kinds of fish in those zones are declining, some species appear able to ride it out, according to a study published this month in the journal Fisheries Oceanography.

The study focused on catches from 2008 through 2010 of four species of deepwater groundfish — Dover sole, petrale sole, spotted ratfish and greenstriped rockfish.

“It’s rearranging that ocean geography,” Barth said of the low-oxygen conditions. “If you go out to a spot where you’ve always gone before commercial fishing, and you don’t catch what you expect, is it because the oxygen has gone low and things moved someplace else?”

Dead zones were first noticed off Oregon in 2002, where they peaked in 2006, and have since spread to Washington and California waters.

Some, such as where the Mississippi River flows into the Gulf of Mexico, are caused by agricultural runoff. On the West Coast, scientists have demonstrated they are triggered by climate change.

North winds cause the ocean to turn over, drawing cold low-oxygen water up from the depths. Conditions get worse as tiny plants, known as phytoplankton, are drawn to the surface, where sunshine triggers a population explosion. As they die, they sink and use up more oxygen as they decompose.

Underwater videos have shown crabs and other slow-moving bottom-dwellers in shallow waters die, but scientists from NOAA Fisheries Service and Oregon State wanted to know what happened to fish.

NOAA Fisheries was already chartering fishing trawlers to do annual surveys of groundfish populations off the West Coast. They equipped the nets with oxygen sensors.

The next step, she said, is to expand the surveys to include more commercially important species.

Tim Essington, professor of fisheries at the University of Washington, was not part of the study but said it was significant for covering a large geographic area, and was consistent with what has been seen in estuaries. He added he expects fish to congregate along the edges of low-oxygen zones, where predators will be able to feed on less active fish inside the zone.

NOAA oceanographer Bill Peterson, who was not part of the study, said there was no doubt that low-oxygen waters were expanding, but it was a slow process that would take decades to be felt.