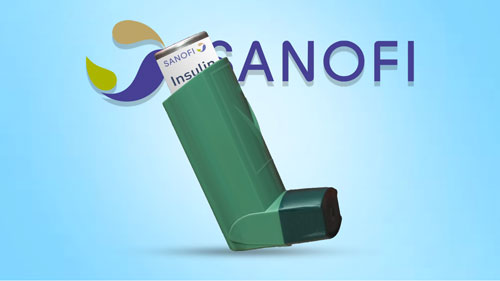 Sanofi launched an inhalable insulin in the United States on Tuesday in a potential boost for its flagging diabetes drug sales and for patient quality of life.

Developed by Mannkind Corp, Afrezza will be the only inhalable insulin on the U.S. market, where Sanofi competes with Eli Lilly and Novo Nordisk for sales of traditional injectable insulin.

Inhalation promises to be faster acting and much more convenient than injections, but an inhaled product has failed in the past and there are concerns about the potential risks associated with breathing powdered insulin.

Afrezza, which uses a whistle-sized inhaler and works to control blood-sugar levels in both type 1 and type 2 diabetes, was developed in the shadow of Pfizer’s rival Exubera and approved by the U.S. Food & Drug Administration in June.

Exubera was approved in 2006 with expectations of $2 billion a year in sales but the inhaler was bulky, and patients were put off by the need for periodic lung function tests. Eventually it was withdrawn.

In the Afrezza marketing deal struck last year, Mannkind won an upfront payment of $150 million, potential further milestone payments of up to $775 million and 35 percent of future profits.

Priced at $7.54 for a daily dose of 12 units, Afrezza will be pricier than $3.14 Apidra, which is the injectable equivalent in Sanofi’s drugs stable.

Afrezza should not be used in patients with asthma, or those suffering from certain complications, however. It is also not recommended for smokers or recent ex-smokers.

Industry analysts have said they expect Afrezza to generate modest sales of about $182 million a year by 2019 according to Thomson Reuters Cortellis, given Exubera’s problems and the restrictions on use.

Sanofi’s diabetes division generates about $7 billion of sales annually and around 30 percent of group profits, but the patent on its Lantus insulin, the world’s most prescribed, expires this year, and it expects little or no sales growth through 2018.

A poor diabetes performance in 2014 was one of the reasons Sanofi sacked chief executive Chris Viehbacher in October. The company is now betting on products like Afrezza and an improved version of Lantus called Toujeo.

Orally delivered insulin is difficult to develop because the protein gets broken down in the stomach, but last year Danish group Novo Nordisk completed a Phase I trial of an oral version.