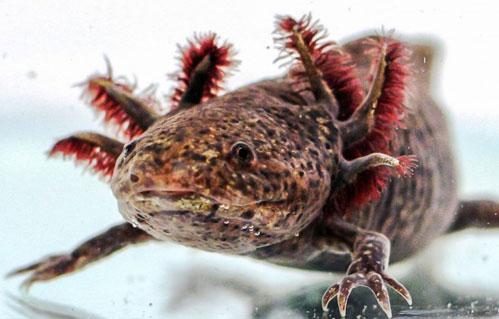 When the first four-legged creatures emerged from the sea roughly 375 million years ago, the transition was anything but smooth. Not only did they have to adjust to the stress of gravity and the dry environment, but they also had to wait another 100 million years to evolve a fully functional ear. But two new studies show that these creatures weren’t deaf; instead, they may have used their lungs to help them hear.

Fish hear easily underwater, as sound travels in a wave of vibration that freely passes into their inner ears. If you put a fish in air, however, the difference in the density of the air and tissue is so great that sound waves will mostly be reflected. The modern ear adapted by channeling sound waves onto an elastic membrane (the eardrum), causing it to vibrate. But without this adaptation, how did the first land animals hear?

To answer this question, a team of Danish researchers looked at one of the closest living relatives of early land animals, the African lungfish (Protopterus annectens). As its name suggests, the lungfish is equipped with a pair of air-breathing lungs. But like the first animals to walk on land, it lacks a middle ear. The researchers wanted to determine if the fish could sense sound pressure waves underwater, so they filled a long metal tube with water and placed a loudspeaker at one end. They played sounds into the tube in a range of frequencies and carefully positioned the lungfish in areas of the tube where the sound pressure was high. Monitoring the brain stem and auditory nerve activity in the lungfish, the researchers were surprised to discover that the fish could detect pressure waves in frequencies above 200 Hz.

The scientists hypothesized that the fish’s air-filled lungs might be responsible, because the air inside them buzzes and rattles in response to a propagating pressure wave. To confirm their hypothesis, however, they had to show that the air in the lungs vibrates in a frequency range that the fish’s auditory system could detect. Using x-ray imaging, they did just that, showing that the lungs of P. annectens resonated at about 300 Hz, matching the sensitivity of the lungfish’s hearing. The researchers also tested the hearing of lungfish in air, and to their surprise it turned out that the fish were not completely deaf, they report online this month inThe Journal of Experimental Biology.

In a second paper, published online today in the Proceedings of the Royal Society B, the same scientists looked at salamanders that have an ear configuration like those found in some of the early land animal fossils, thus allowing them to shed light on how the first four-legged animals may have heard. These animals’ ears are more like that of frogs, lacking an eardrum but having inner ear bones.

The researchers repeated the lungfish experiments with the salamanders and found that they were able to detect sound pressure at frequencies higher than 120 Hz underwater. As with the lungfish, the salamanders’ lungs vibrated in a frequency range that they were able to hear. Despite having a fully functioning middle ear, these animals sensed sound pressure even better than their lungfish predecessors.

This research demonstrates that early land animals “with no obvious adaptations for hearing nonetheless could pick up sound waves aided by an air bladder [such as a lung],” says Jennifer Clack, a paleontologist at the University of Cambridge in the United Kingdom, who was not involved with the work.

Taken together, these results suggest that early terrestrial animals may have been able to hear sounds when they first stepped onto land, aiding by their newly formed lungs. “Lungs started to appear in fish underwater when they evolved air breathing in response to low oxygen levels in water 350 to 400 million years ago,” says study author Peter Madsen, a biologist at Aarhus University in Denmark. He says that any animal with air-filled lungs that vibrate in response to pressure waves “will hear pressure in water whether it wants to or not.” Further, the aerial hearing of lungfish and salamanders suggests the first land animals heard well enough in air to provide a functional steppingstone for the evolution of the middle ear.