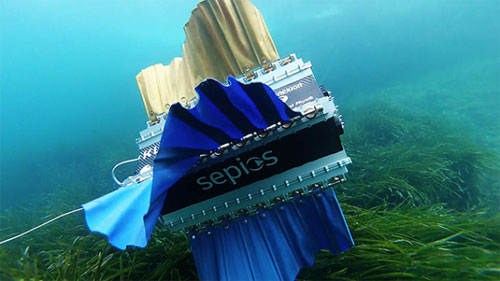 Created by Pascal Buholzer and fellow students from the Swiss Federal Institute of Technology in Zürich, the copycat robot, named Sepios, demonstrates that its finned design can be an environmentally friendly alternative to propellers. Underwater plants are likely to get tangled in spinning blades, but Sepios was filmed diving into a forest of seagrass and then effortlessly moving through it, even in stormy conditions. The symmetrical arrangement of its fins allows it to move easily in any direction while each fin can be steered individually for precise control. In a demonstration, it gracefully navigated its way through a metal frame.

Propeller noise is also a threat to marine mammals: it stresses whales and misleads dolphins, and deflected sounds can cause injuries or death. In comparison, Sepios’s propulsion system is almost silent. Its resemblance to a marine animal could also make it ideal for filming underwater wildlife.

The robot recently wowed viewers at Techfest in Mumbai, India, alongside other creations like cubical soccer-playing robots. The team is now working on improving the coordination of its many sensors, for example pressure and humidity detectors and an on-board camera, laser and inertial measurement unit that help it avoid collisions.