How to predict what height meteors explode at

Home » Future » How to predict what height meteors explode at 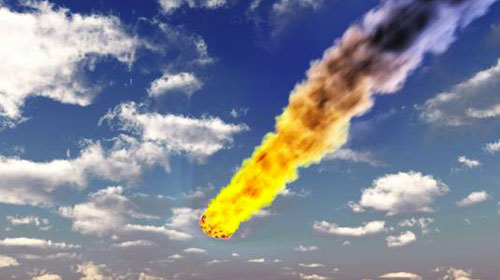 Great balls of fire rip through Earth’s atmosphere every day – but guessing which will hit the ground has been a challenge. Now, a model predicts how high up each incoming space rock will be when it bursts into flame – and whether people on the ground should look out for shrapnel.

When space rocks are unlucky enough to cross paths with our planet, friction in the atmosphere bakes them up and turns them into fireballs. Most of the time, this happens high enough that they don’t pose a threat, burning up totally before nearing the ground. “Our atmosphere provides an effective shield against these otherwise dangerous projectiles,” says Manuel Moreno-Ibàñez of the Autonomous University of Barcelona in Spain.

But the low-fliers can do some damage, whether or not they reach the surface. Two years ago, for instance, a meteor exploded 29 kilometres over the Russian region of Chelyabinsk, outshining the sun and releasing more energy than 20 atomic bombs. Bigger, lower rocks have famously been blamed for mass extinctions.

So scientists would like a way to predict what happens to rocks of different shapes, sizes and rotations as they approach us. Now, Moreno-Ibàñez and his colleagues have figured out how to precisely calculate a rock’s flame-out height using two parameters: how much aerodynamic drag it feels, and how the atmosphere heats it up.

After finding these magic numbers using rocks’ trajectories, they modified an existing equation to better reflect reality, allowing them to calculate how deep the rocks are likely to penetrate into our atmosphere.

The team then tested the model on past fireballs, whose trajectories and heights were known from the Meteorite Observation and Recovery Project, an observation campaign that ran from 1971 to 1985 using 60 sky-scanning cameras in Canada. The method worked, mirroring what the cameras saw (Icarus, doi.org/z82).

Next, the team plans to test the model further by running the numbers on the Chelyabinsk meteor and others. Ultimately, they hope to calculate the heights of future fireballs and the landing sites of any fragments.

Unfortunately, this method won’t work for dinosaur-killers, which are big enough to remain intact when they heat up. But the smaller rocks that reach Earth as meteorites can teach us about their larger cousins. And the model is useful for finding those: it predicts the energy fragments will have if and when they hit, and where that will be.

“Recovering meteorites from fireball events provides us with an opportunity to learn more about the solar system and, more importantly, the materials that comprise objects in space that could potentially threaten Earth,” says Michael Hankey of the American Meteor Society. “Every meteorite that lands on Earth is a piece of space.”

Although these bursts happen frequently, cameras must scan the right part of the sky at the right time to see them. NASA and other space agencies have a number of ground and space-based telescopes scanning the skies for dangerous rocks, and the private B612 Foundation wants to launch a space telescope called Sentinel dedicated to the task.

Still, there could be more bad news out there. Chelyabinsk, for example, caught us off-guard, and so far only a few meteorites have been tracked from space to the ground. The model offers some hope that future research will be more fruitful, but also highlights the need for vigilant telescopes. After all, we can only predict the fallout from big space rocks if we see them coming.