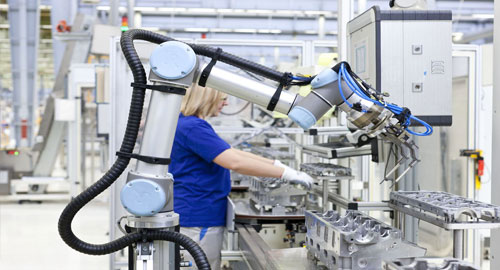 In 2013, researchers Carl Frey and Michael Osborne of the Oxford Martin School dropped the bombshell that 47 percent of U​S jobs were at risk of computerisation. Since then, they’ve made similar predicti​ons for the UK, where they say 35 percent of jobs are at high risk.

“My predictions have enormously high variance,” Osborne told me when I asked if he was optimistic. “I can imagine completely plausible, incredibly positive scenarios, but they’re only about as probable as actually quite dystopian futures that I can imagine.”

In a new ​report produced as part of a programme supported by Citi, he and Frey outline how increased innovation – read: automation – could lead to stagnation.

The problem is that we’re seeing more and more jobs becoming automated, but little job creation. You might expect new technologies to open up new opportunities, but the report points to previous findings that only 0.5 percent of US jobs in 2010 came from industries that didn’t exist in 2000.

When WhatsApp was acquired for $19 billion, it still only employed 55 people

Osborne gave a few examples: iOS developers, Zumba instructors, and people working with social media. Jobs that are most safe naturally require skills that are simply difficult for a bot to do, the “three bottlenecks to automation:” creativity, social intelligence, and the ability to interact with complex objects and environments.

Things are a bit different now compared to Hansen’s day. “In Hansen’s framework, stagnation stems from a slowdown in technological progress, resulting in fewer investment opportunities,” the researchers write. But: “Crucially, the sluggish job creation in digital industries does not necessarily imply a slower or faster pace of innovation.”

Rather, the kind of innovation we’re seeing just isn’t creating jobs, because it doesn’t need labour to build capital. They use the example of WhatsApp: It started out with $250,000 in funding but when the mobile-messaging app was acquired for $19 billion, it still only employed 55 people.

This means that while digital industries are making money, more people are at risk of being “completely left out of the pie,” in Osborne’s words. He said part of the cause was technology allowing individuals to have a greater influence, and part of it was related to the “superstar phenomenon”: “a small number of extremely lucky or extremely talented individuals carving off a much larger slice of the pie.”

As consumers we’re benefiting enormously; as workers we’re being harmed

So how do we stop this stagnation, and the continued increase in already​ soaring inequality it’s likely to cause?

Osborne suggested that we should equip workers to engage with developing technologies, so they’re able to benefit from them, and focus on those bottlenecks still faced by automation. Giving people those skills could help them find jobs that aren’t readily replaceable by technology, but also help them to develop new technologies and push innovation further.​

The jobs that we could start seeing on the back of new technologies, like solar or wind energy engineers, are also likely to demand skilled workers.

He’s a big fan of MOOCs – Massive Online Open Courses – as a lower-cost alternative to conventional higher education that could increase access to this kind of training. Ironically, that kind of digital education presents its own automation risk; though Osborne doesn’t think MOOCs could actually replace teachers.

Technology isn’t a bad thing. The innovations we’re talking about have the potential to make our lives much easier; the problem arises when they change the workforce and economy such that people can’t afford to participate. On the upside, we’re enjoying our leisure time more, but that’s little consolation if you’re “at leisure” because you’re unemployed.

To prevent all the benefits going to the creators of these technologies, to the detriment of the rest of society, there are other options to consider. Osborne thinks there is a demand to look into things like redistribution or the basic income guarantee, “to make sure there is some kind of safety net such that people can innovate without the fear of losing out completely.”

The report calls for a long-term plan to make economic growth inclusive. In the meantime, you might want to start taking that Zumba class more seriously.