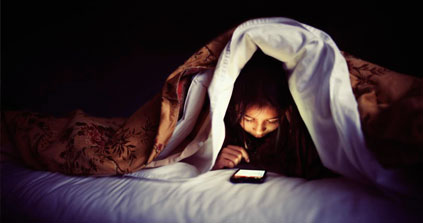 Concerns about young people’s dependence on social media and its impact on their wellbeing appear set to grow after a study found that one in five children wake up almost every night to either read or post messages.

The research, carried out among secondary school children across Wales and published on Tuesday, surveyed more than 400 pupils in year 8 (aged 12 and 13) and 400 in year 10 (aged 14 and 15) to find out about their bedtime and sleeping patterns.

Yet according to the research, the disruption caused by using social media at night may have more of an impact on fatigue the next day than the number of hours spent in bed.

Those surveyed were asked how often they felt tired at school. More than half of those who reported “almost always” waking to use social media said they “almost always” go to school feeling tired.

This was much higher than the overall percentage of respondents saying they “almost always” feel tired at school, which was 32% among year 8 pupils and 39% among year 10s.

The report, by researchers at the Wales Institute of Social and Economic Research, Data & Methods (Wiserd), comes just days after a University of Glasgow paper warned that teenagers using social media through the night were increasing their risk of anxiety and depression.

The Scottish study found that children as young as 11 were on Facebook and Twitter and using them “considerably”. Some pupils were using multiple devices to view different sites simultaneously and were on them “into the early hours of the morning”.

As well as concern about the impact of social media on young people, this latest research reflects growing interest in the role of sleep on the wellbeing and academic achievement of children, particularly among older teenagers.

Last week, Dr Paul Kelley, a former headteacher now working at Oxford University’s Sleep and Circadian Neuroscience Institute, told the British Science Festival that school start times should be put back by up to three hours to tackle sleep-deprivation among pupils.

But the Wiserd paper, which is being presented at the British Educational Research Association’s annual conference on Wednesday, argues against later school start times.

The paper concludes: “Having a regular morning routine may actually prove to be a very important feature in helping adolescents concentrate and enjoy their learning, something that may actually be undermined by changes to the school day.”

Dr Kimberley Horton, one of the authors of the report, said: “Having a regular wake time and using social media during the night appear to be more important in determining whether a young person is always tired during the day than the time they go to bed, how long they spend in bed and having a regular bedtime.

“It seems very important to discourage adolescents from using social media during the night. No amount of effort to develop regular bedtimes or to lengthen the time in bed would seem to be able to compensate for the disruption that this can cause.”