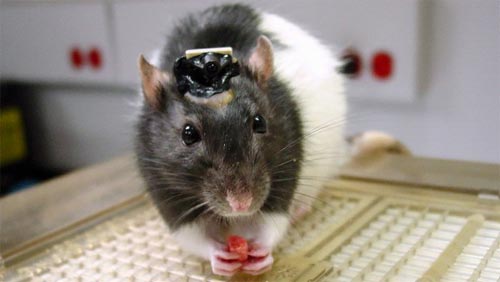 Aside from a few animals—like pythons and vampire bats—that can sense infrared light, the world of this particular electromagnetic radiation has been off-limits to most creatures. But now, researchers have engineered rodents to see infrared light by implanting sensors in their visual cortex—a first-ever feat announced here yesterday at the annual meeting of the Society for Neuroscience.

Before they wired rats to see infrared light, Duke University neuroscientist Miguel Nicolelis and his postdoc Eric Thomson engineered them to feel it. In 2013, they surgically implanted a single infrared-detecting electrode into an area of the rat’s brain that processes touch called the somatosensory cortex. The other end of the sensor, outside the rat’s head, surveyed the environment for infrared light. When it picked up infrared, the sensor sent electrical messages to the rats’ brains that seemed to give them a physical sensation. At first, the rats would groom and rub their whiskers repeatedly whenever the light went on. But after a short while, they stopped fidgeting. They even learned to associate infrared with a reward-based task in which they followed the light to a bowl of water.

In the new experiment, the team inserted three additional electrodes, spaced out equally so that the rats could have 360 degrees of infrared perception. When they were primed to perform the same water-reward task, they learned it in just 4 days, compared to 40 days with the single implant. “Frankly, this was a surprise,” Thomson says. “I thought it would be really confusing for [the rats] to have so much stimulation all over their brain, rather than [at] one location.”

Next, the researchers began redirecting infrared traffic: Instead of the somatosensory cortex, they stuck the electrode into the rats’ visual cortex. And here’s the kicker: Rats receiving “visual” stimulus of infrared learned the same water-reward task in a single day. Thomson speculates that the visual cortex adjusted so well because the wavelength of infrared light is very close to that of visible light.

Ron Frostig, a neurobiologist at the University of California, Irvine who was not involved with the study, says it’s critical that introducing a new sense doesn’t compromise existing senses. If that happened, he says, it would cancel out any potential therapeutic application. So far, seeing infrared seems to integrate nicely with both vision and touch. “This is not a ‘winner takes all’ kind of situation,” Frostig says. “The entire somatosensory cortex does not become an infrared cortex. It’s doing two jobs simultaneously, and that shows a wonderful plasticity.”

The rats’ quick learning curve suggests that human adults, too, may have more malleable brains than we suspect. Nicolelis and Thomson say their findings are also encouraging for researchers trying to develop sensory prosthetic devices that could one day augment human senses—although they’re not suggesting people will be able to see the infrared light coming from their television remotes anytime soon.

“I’m still pretty amazed,” says Thomson. “Yes, the brain is always hungry for new sources of information, but the fact that it actually absorbed this new, completely foreign type so quickly is auspicious for the field of neuroprosthetics. And that’s why I’m excited.”