What It’s Like to Have a Robot for a Teacher 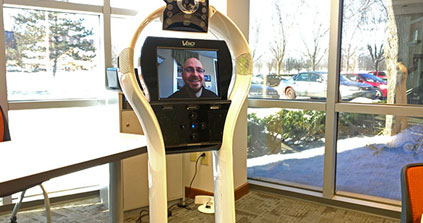 A telepresence robot, that is.

Thomas Hatch noticed something unusual in a reflection on his laptop screen as he worked on a lesson one day in his pod at high school.

The teenager turned around. He was face to face with a teacher of an online course. Well, sort of. The teacher’s face was encased in a small video screen. His body was a 4-foot-tall plastic tower on wheels. He maneuvered the telepresence robot around the classroom and spoke to students using controls on his computer from a remote location.

“It was, um, different—definitely different,” Hatch said of his first encounter with the robot last year, when he was a junior at the Nexus Academy of Columbus.

The public high school in central Ohio blends online and in-person instruction in an open, office-style building located in a small industrial park. The school has some in-the-flesh teachers, but many teachers never set foot in the building, because they teach only online courses—some from locations quite far away. Most of the time, the remote teachers interact with their students through a computer screen or phone call. The new telepresence robot provides another means of communication with students and staff in the building.

“I was excited about it,” said Thomas Fech, a social studies teacher who logged on from his home in Arizona last year to use the robot to maneuver around the Ohio school. “I was so far away, but with the help of this body I could walk around the building.”

The Nexus Academy of Columbus is part of a network of seven charter schools in Ohio, Michigan, and Indiana. They started with one telepresence robot in one school three years ago and then added a second, in the Columbus school, last year. This school year all the schools have one robot.

What makes these robots better than a video chat on a stationary computer screen? Some teachers and students at the Columbus school said it creates a different dynamic. A phone call or a Web chat requires two people—someone has to answer on the other end of the line. With the robot, the teacher can log in and zoom around without anyone lifting a finger inside the school building. It gives the teachers a measure of control. If they need to speak to someone, they can log in and go find the person, without waiting for someone else to take action.

Lights flash on the robot body when a teacher signs in to control the robot. A screen the size of a small tablet computer shows a live video of the teacher’s face. A webcam flips open above the screen, revealing the Cyclops eye that helps the long-distance teacher “drive” the robot. They zip around the school just like any other teacher—except for when the robot crashes into walls and doorways. The depth perception and peripheral vision aren’t great, Fetch said. But the technological hiccups don’t bother him.

“It’s fun,” Fech said. “I like driving it around and feeling like I am in the school. It’s neat to feel like I am part of the classroom.”

The school’s brick-and-mortar location is open abbreviated hours; students can choose either morning or afternoon sessions offered four days a week, and are required to do at least 12 hours of schoolwork off campus. The curriculum is designed to be preparation for college. The 120 students and 10 in-person staff report to the school building a few days a week at required times to work together. An additional 50 staff are online-only teachers who instruct a variety of classes, both here and in other schools.

“This does a really good job of prepping them for college,” said Jessica Hursey, the principal of the Nexus Academy of Columbus. “They have to manage their time wisely.”

Students use technology to log into classes when the school isn’t open. They must do work remotely—they can’t accomplish everything if they don’t, Hursey said. Each student has a laptop. The school tests additional technology on a small scale before making a big investment, Hursey said. The robots cost about $6,000 each to buy, plus $1,100 in yearly upkeep, she said. That’s why they started with one robot in one school to see how it worked before buying one for each school. The leaders and the teachers constantly reassess all technology used in the schools, she said, to make sure it’s used and useful.

Use of telepresence robots is not unheard-of in schools. Some schools have used them to give students with medical issues a way to attend class. There is some research about the psychology of communication through telepresence robots, which are used outside of schools, too. In a sign of the growing popularity of this technology, a TV show on CBS, The Good Wife, featured an episode in which office assistants used telepresence robots to work from home. Those robots crashed into walls quite a bit, too.

The humor in robots lurching around the school isn’t lost on the teachers and students at the Nexus Academy in Columbus. The principal considered putting a T-shirt on the robot body to provide the futuristic tower with a more humanlike form. She decided against it. “It might make it weirder,” Hursey joked.

Hatch, who is a senior this year, said he was unconvinced of its value when the robot first approached him in school last year. It seemed silly. After time, however, his feelings changed. It made the teacher he never met in the flesh seem less abstract.

“It sort of grew on me,” Hatch said. “Seeing the teacher’s face, and they would be there, showing up in the room—it felt more personal than just a screen.”