What effect does extreme cold have on the human body?

Home » Future » What effect does extreme cold have on the human body? 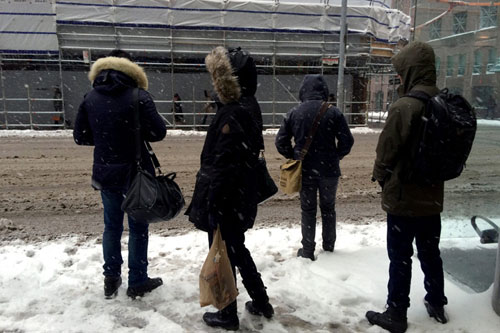 The polar vortex currently sweeping across the North American continent is bringing with it scenes usually associated with the Arctic or Antarctic. Massive snowfall and violent winds have plummeted temperatures down to record lows. In some areas of the US, such as the state of Indiana, all but essential emergency vehicles are banned from the roads. People are being urged to remain inside in the warm.

The human body is not designed for polar cold – most of us live in temperate and tropical climes, where the mercury rarely dips below freezing. There are populations that have adapted to polar extremes – like the Inuit in Arctic Canada and tribes like the Nenets in the north of Russia – but the vast majority of Homo sapiens has no experience of living in such sub-zero temperatures. And while our ingenuity and expertise has allowed us to create clothing to withstand all but the most violent Arctic blizzards, polar survival is all about keeping out of the most fearsome cold unless you absolutely have to.

What happens when we get cold? The human body has several defence mechanisms to try and boost our core temperature when it gets chilly. Our muscles shiver and teeth chatter. Our hairs rise and our flesh forms “goosebumps” – a kind of evolutionary echo from the times when our ancestors were covered in fur. The hypothalamus, the gland in the brain that acts as your body’s thermostat, stimulates these reactions to keep the body’s vital organs warm, at least until it can find some kind of warmth and shelter.

The hypothalamus’s mission is to keep the core warm at all costs – sacrificing the extremities if need be. That’s why we feel pins and needles in our fingers and toes in extreme cold – the body is keeping its warm blood close to the centre, constricting blood supply in the outer regions such as the end of our limbs. In extreme cold, and especially if bare skin is open to the elements, this effect can end in frostbite. Blood flow is reduced, and the lack of warm blood can lead to tissue freezing and rupturing.

So how do other warm-blooded animals living in such climes cope when we can’t? Polar animals are either covered in winter coats of fur – which traps warm air close to the body – or else large quantities of fat, sometimes inches thick. Fat does not transfer heat very well, so it keeps it inside the body. Humans, with naked skin and relatively little fat, just aren’t built for these environments.

But we have learned to mimic these qualities. Scientists in Antarctic stations, for instance, dress in layers upon layers, which traps warm air close to the body like fur does.

The other problem with the kind of weather currently affecting the US is that it can create problems with some of the things mankind relies on. Intense cold can bring down power lines due to the weight of ice, cutting power supply. Uninsulated pipes can freeze and burst. And cars? The freezing point of petrol is around -60C (-76C), but oil is around -40C (-40F), and other lubricants can thicken at less than that. Diesel normally clogs at much warmer temperatures – around -10C (14F) – unless it has special additives to enable it to remain viscous in cold temperatures.

There are some sobering stories from history to warn us of the dreadful effects of such cold. When Hitler’s armies invaded Russia in 1941, the early winter saw temperatures dropping to similar levels as we are seeing in the US. Many thousands of soldiers froze to death, still wearing the summer uniforms of what was expected to be a short campaign. Truck and tank engines froze solid, and could only be thawed out by lighting fires underneath them. Guns could not be fired because the grease had fused solid. Boiling water taken off the fire would freeze solid in little more than a minute. Italian journalist Curzio Malaparte recalled in his novel Kaputt seeing Eastern Front veterans disembarking in then-occupied Warsaw; the soldier had all had their eyelids frozen off due to the extreme cold.

The recent freezing temperatures have allowed people to indulge in one bizarre scientific quirk from such cold weather – the Mpemba effect. It is named after the Tanzanian schoolboy who first suggested that boiling water actually freezes quicker than cold water.