Virtual reality is coming: but what will make it worth visiting?

Home » Future » Virtual reality is coming: but what will make it worth visiting? 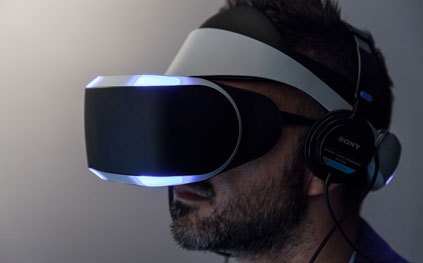 Morpheus, Gear, Rift, Vive—the list of prospective virtual reality devices is growing longer. And although this latest chapter in virtual reality was born in Oculus founder Palmer Luckey’s garage a few years ago, now the great powers of tech and gaming are vying to develop and control our portals on the virtual world.

Each of these is loosely based on the Rift-inspired blueprint: A headmounted display split in two to give viewers the illusion of depth by parallax; sensors tracking head motion; and software smoothly tailoring the virtual world to fit. Differences include resolution per eye, display refresh rates, controllers, and body tracking.Oculus, owned by Facebook, hasn’t announced a date for a consumer Rift, but speculation pegs a release late this year or early next. Samsung, collaborating with Oculus, released its smartphone-based Gear headset in December. Valve recently showed off its HTC Vive VR system, due in 2015. And Sony is expected to release its Morpheus device in the first half of 2016.

While there are alternatives to the VR model – augmented reality systems like Microsoft’s HoloLens and Magic Leap, for example – tech firms seem determined to open the door on immersive digital experiences. An increasingly pertinent question isn’t what these VR portals will look like: It’s what lurks beyond them.

Where will we go and will it be worthwhile?

To date, whether you strap on a Rift or Vive, you’ll be treated to a fairly limited virtual experience. That’s not to say it isn’t mindblowing. It is. But that’s mainly due to the novelty of immersive virtual worlds. As the novelty wears off, there will likely be awesome traditional video games tailored to VR. And VR films are on the way. But the potential for exploration seems even greater than either of these.

I recently read an article about a fascinating approach to world-building by indie game developer, Hello Games. Due out later this year on PS4, their game, No Man’s Sky, is quite simply…vast.

No Man’s Sky is what happens when a game’s art directors sketch out their game’s general parameters, and then turn its development over to the computer to scale it up like no human could.

How does it work? The game’s creators made template planets, ships, creatures, and so on, and then wrote algorithms to iterate on their designs. The software creates untold variation on body parts, shapes, colors, and more. It’s a little like the way our own universe works. Governed by basic physical laws, building blocks, and evolutionary forces, the whirling cosmos self-assembles into the myriad forms we see.

No Man’s Sky isn’t anywhere near as granular or complex. But it is on a universal scale. The game is said to contain 18 quintillion planets. A number so big it’s meaningless. To maintain a semblance of quality control, the team even built an algorithmic “space probe” to visit every world and make animated GIFs of them.

But it isn’t about No Man’s Sky specifically as much as it is about the limitless nature of digital worlds and digital world building. VR promises to be a new art form, where the process by which you build will be as important as each individual creation. I imagine the scope of virtual worlds could rapidly dwarf our own.

“Whether a distant mountain or a planet hanging low on the horizon, you can go there,” the developers of No Man’s Sky write on the game’s homepage. “Every star in the sky is a sun that you can visit. Where you’ll go and how fast you’ll make your way through this universe is up to you. It’s yours for the taking.”