These sparkly sea organisms are an eerie omen of climate change 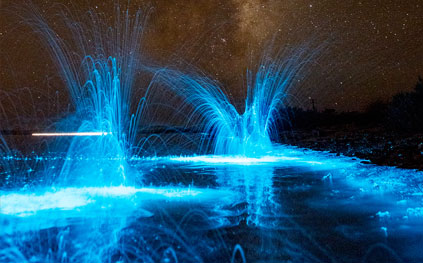 This river in Southern Tasmania seemed to come alive this week as a bloom ofNoctiluca scintillans – a type of bioluminescent plankton, also known as “sea sparkle” – washed into the region.

When it’s disturbed, the organism produces light in its cytoplasm, the gel-like substance inside its single cell.

As news of the bloom spread, hundreds of people came to see the spectacle, says Gershwin. “People turned out in droves, rolled up their pant legs and danced, ran, splashed, stomped, tiptoed, you name it, people played! It was incredible!”

But there is a dark side to this impromptu festival of light. “The displays are a sign of climate change,” says Anthony Richardson from the CSIRO, Australia’s national science agency in Brisbane.

Until 1994, Noctiluca had not been seen in Tasmania. But global warming has been strengthening the East Australian current, which pushes warm water south towards Tasmania. “As the Southern Ocean warms, it will be warm enough for Noctiluca to survive,” says Richardson.

What’s more, these particular plankton have more direct impacts too. “Noctiluca is a voracious feeder on diatoms, which is the food for krill in the Southern Ocean,” says Gustaaf Hallegraeff from the University of Tasmania in Hobart. Dense blooms like this can therefore starve other organisms, he says. They can also kill fish through oxygen depletion and gill irritation.

“As wondrous and entertaining as Noctiluca is, it is also a species infamous for causing fish kills,” says Gerhswin. But what the outcome will be from this particular bloom remains an unresolved question, adds Hallegraeff. “Blooms can disappear within days, leaving essentially no trace.”