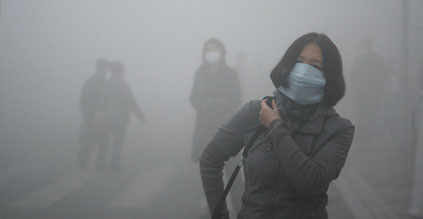 When it comes to the decision of where to launch their businesses, innovators now have another factor to consider: air quality. According to a new medical study from researchers at Beth Israel Deaconess Medical Center and Boston University School of Medicine, long-term exposure to air pollution has the potential to damage the brains of some city dwellers.

The air pollution research, based on studies of older residents (age 60 and over) from New England and New York, found that long-term exposure to even a small amount of ambient fine particulate matter may pose a risk to brain structure and cognitive function in middle-aged and older adults. As the researchers highlight, air pollution in the range commonly found across metropolitan regions in the Northeast can lead to smaller brain size and “silent” strokes. While the exact mechanism causing this brain damage is still unknown, it’s thought that inflammation in the lungs from inhaling fine particulate matter found in the air of urban environments leads to broader systemic inflammation, including inflammation in the brain.

If nothing else, this new research study helps to build the case against cities with poor air quality. After all, previous studies have found that air pollution shortens life expectancy, increases the risk of anxiety and stroke, and leads to slower cognitive development in children.

As a result, air quality could become just the latest quality of life argument tipping the scales in favor of smaller tech hubs. Other factors in the past that have been used to sway entrepreneurs and innovators to relocate their businesses away from mega-cities to smaller tech hubs include faster commute times and greater access to the great outdoors for recreational purposes. Even simple steps – making bike lanes more accessible to city-dwellers, for example – can help to make a city more attractive.

If South Dakota can use “oxygen” as part of a cheeky new branding campaign to attract tourists and potential residents, why can’t smaller cities and tech hubs use “clean air” as a way to attract entrepreneurs, coders and R&D professionals?

Some of America’s smaller tech hubs are already doing a great job of attracting smart, innovative people by pitching the whole quality of life issue. Portland (or Portlandia, if you prefer) has emerged as an up-and-coming West Coast alternative to California as a place where young innovators want to live and work. In the center of the country, Silicon Prairie, centered in Lincoln, Nebraska, has used the allure of green, open spaces to attract young entrepreneurs to relocate away from densely populated urban hubs.

If you take a look at the 2o14 State of the Air report from the American Lung Association, which ranks America’s cleanest and most polluted cities in terms of air quality, you can see how the air pollution issue might have important implications for the geographical structure of American innovation. Smaller cities with clean air could one day challenge mega-cities as the preferred destination for tech innovators. The cleanest cities are located in Alaska, Maine, North Dakota, Washington State, Oregon, Vermont and Georgia while the most polluted cities include Los Angeles, Dallas-Fort Worth, Houston, Washington-Baltimore-Arlington and New York. In fact, six of America’s top 10 most polluted cities are located in California, the state typically considered to be the center of American innovation.

And if you zoom out nationally and take a look at the picture globally, much of the same dynamic would theoretically play out. Countries such as China and India – typically considered two of the greatest contenders to America for the title of most innovative nation in the world – have a number of issues to resolve when it comes to air pollution given that New Delhi and Beijing rank among the most polluted cities in the world. Globally, geographic locales such as Scandinavia and Switzerland are much more desirable places to run a business if air quality is the sole factor under consideration.

The big question, of course, is whether air pollution will ever become a leading reason why innovators and entrepreneurs decide to relocate. Most entrepreneurship studies – such as the 2014 Endeavor Insight report (“What Do the Best Entrepreneurs Want in a City?”) – cite access to talent, networking opportunities and proximity to customers and suppliers as the most important factors for attracting innovators. And that’s an area where smaller tech hubs have always come up a bit short – there simply hasn’t been enough critical mass of talent and start-ups to attract others to move there. Sure, breathing in clean air in the morning may be nice, but entrepreneurs still need to run a business during the rest of the day (and night).

At the end of the day, however, air pollution should not just be something that innovators have to accept to enjoy the benefits of living in a city. The triumphalism of the mega-city has become so ingrained in the way we think about innovation that it sometimes seems as though only America’s biggest cities are capable of guiding the future of American innovation. But that doesn’t have to be the case, not with the rapid rise of alternative tech hubs around the nation.

In the future, solar-powered and wind-powered cities might one day be viewed as more desirable places to live than cities powered by dirty fossil fuels. That puts the impetus on mega-cities such as Los Angeles and New York to lead the way in addressing the dangers of air pollution for their residents.