The path to a wearable future lies in academia

Home » Future » The path to a wearable future lies in academia 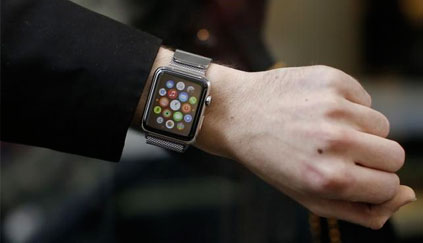 For a glimpse of what is, what might have been and what may lie ahead in wearable devices, look beyond branded tech and Silicon Valley start-ups to the messy labs, dry papers and solemn conferences of academia.

There you’d find that you might control your smartphone with your tongue, skin or brain; you won’t just ‘touch’ others through a smart Watch but through the air; and you’ll change how food tastes by tinkering with sound, weight and color.

Much of today’s wearable technology has its roots in these academic papers, labs and clunky prototypes, and the boffins responsible rarely get the credit some feel they deserve.

Any academic interested in wearable technology would look at today’s commercial products and say “we did that 20 years ago,” said Aaron Quigley, Chair of Human Interaction at University of St. Andrews in Scotland.

Take multi-touch – where you use more than one finger to interact with a screen: Apple (AAPL.O) popularized it with the iPhone in 2007, but Japanese academic Jun Rekimoto used something similar years before.

And the Apple Watch? Its Digital Touch feature allows you to send doodles, ‘touches’ or your heartbeat to other users. Over a decade ago, researcher Eric Paulos developed something very similar, called Connexus, that allowed users to send messages via a wrist device using strokes, taps and touch.

“I guess when we say none of this is new, it’s not so much trashing the product,” says Paul Strohmeier, a researcher at Ontario’s Human Media Lab, “but more pointing out that this product has its origins in the research of scientists who most people will never hear of, and it’s a way of acknowledging their contributions.”

Those contributions aren’t all pie-in-the-sky.

Strohmeier and others are toying with how to make devices easier to interact with. His solution: DisplaySkin, a screen that wraps around the wrist like a vambrace, or armguard, adapting its display relative to the user’s eyeballs.

Other academics are more radical: finger gestures in the air, for example, or a ring that knows which device you’ve picked up and automatically activates it. Others use the surrounding skin – projecting buttons onto it or pinching and squeezing it. Another glues a tiny touchpad to a fingernail so you can scroll by running one finger over another.

Then there’s connecting to people, rather than devices.

Mutual understanding might grow, researchers believe, by conveying otherwise hidden information: a collar that glows if the wearer has, say, motion sickness, or a two-person seat that lights up when one occupant has warm feelings for the other.

And if you could convey non-verbal signals, why not transmit them over the ‘multi-sensory Internet’? Away on business? Send a remote hug to your child’s pyjamas; or deliver an aroma from one phone to another via a small attachment; or even, according to researchers from Britain at a conference in South Korea last month, transmit tactile sensations to another person through the air.

And if you can transmit senses, why not alter them?

Academics at a recent Singapore conference focused on altering the flavor of food. Taste, it seems, is not just a matter of the tongue, it’s also influenced by auditory, visual and tactile cues. A Japanese team made food seem heavier, and its flavor change, by secretly adding weights to a fork, while a pair of British academics used music, a virtual reality headset and color to make similar food seem sourer or sweeter to the eater.

It’s hard to know just which of these research projects might one day appear in your smartphone, wearable, spoon or item of clothing. Or whether any of them will.

“I don’t think I’m exaggerating when I say that 99 percent of research work does not end up as ‘product’,” says Titus Tang, who recently completed a PhD at Australia’s Monash University, and is now commercializing his research in ubiquitous sensing for creating 3D advertising displays. “It’s very hard to predict what would turn out, otherwise it wouldn’t be called research.”

But the gap is narrowing between the academic and the commercial.

Academics at the South Korean conference noted that with tech companies innovating more rapidly, “while some (academic) innovations may truly be decades ahead of their time, many (conference) contributions have a much shorter lifespan.”

“Most ‘breakthroughs’ today are merely implementations of ideas that were unimplementable in that particular time. It took a while for industry to catch up, but now they are almost in par with academic research,” says Ashwin Ashok of Carnegie Mellon.

Pranav Mistry, 33, has risen from a small town in India’s Gujarat state to be director of research at Samsung America (005930.KS). His Singapore conference keynote highlighted a Samsung project where a camera ‘teleports’ viewers to an event or place, offering a real-time, 3D view.

But despite a glitzy video, Samsung logo and sleek black finish, Mistry stressed it wasn’t the finished product.

He was at the conference, he told Reuters, to seek feedback and “work with people to make it better.”