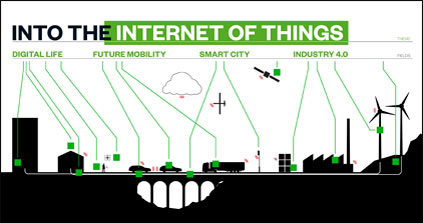 The economic opportunity created by the so-called Internet of things has barely been scratched, according to a report released Wednesday.

A study by the McKinsey Global Institute predicts that the Internet of things, a term for sensor-laden machines connected to the web, will in the year 2025 create between nearly $4 trillion to $11 trillion in economic benefits globally. That includes profits to device-makers, efficiencies, new businesses and savings to consumers from better-run products.

It is difficult to measure the current economic benefit though, because most people now working with the technology are still in the early investment phase.

The biggest gains will be made by companies that figure out how to adapt to the new technology, the report said. On an oil-drilling platform, for example, this might mean knowing by the temperature or chemical changes in a pump that something may have happened upstream, away from the pump. In managing city traffic, this could mean learning how to correctly balance information from cars, roads and traffic lights.

“This puts a premium on predicting incidents based on data from a multitude of sources,” said Michael Chui, one of the report’s authors. But it will be a challenge for companies to find ways to both organize and take advantage of that information.

“Earlier with computers there was something called the productivity paradox, which noted that data about greater efficiency was showing up everywhere but in productivity numbers,” Mr. Chui said. “But that was because there was a lag on the macro level. The early companies that figured out how to use computers, like Walmart, got most of the rewards.”

The report is being released to coincide with a conference on the Internet of things in San Francisco. While there are sessions on subjects like synthetic biology, robotics and design, very little is planned on management.