The highest-paying jobs of the future will eat your life 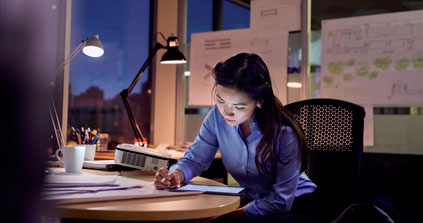 In the future, highly skilled people will be bringing home fatter paychecks, but they’ll rarely be home long enough to spend them.

For a glimpse of the future of work, especially the high-paying kind, look at finance and high-tech companies. Some of the biggest offer high employee salaries combined with lavish perks like free meals at work, luxury shuttle buses for commuters, and extras such as dry cleaning picked up and dropped off at people’s desks. This might look like the fruits of corporate beneficence. In fact, alongside email and other digital technologies, perks like these aim to maximize efficiency and working time, enabling employees to work as many hours as possible without needing to take time off to travel outside for food or errands. While this approach is currently seen as an anomaly, long-term economic trends will force other companies to adopt a similar model – a future of high pay combined with high hours of work.

Research shows that hours worked began falling during the Great Depression but began rising again in the 1970s. The increase in long hours that started then was initially concentrated among high-wage, highly educated men. Whereas 30 years ago, the best-paid workers in the U.S. were much less likely to work long days than low-paid workers were, by 2006 the relationship had flipped: The best-paid were twice as likely to work long hours as the poorly paid. Today, so many people are working “insane hours” that magazines publish guides on how to cope. “Today, technology means that we’re all available 24/7,” David Solomon, the global co-head of investment banking at Goldman Sachs, told The New Yorker last year. “There are no boundaries, no breaks.”

Why will companies want to increase hours? It’s all about boosting profits. Most workers consider only their take-home pay when thinking about how much they cost their company. However, a worker’s wage is only one portion of that employee’s total cost. Fringe benefits, training, and the physical space needed to support each worker comprise a large percentage of total costs.

One example of fringe benefit costs is Social Security, the U.S.’s public pension system. Almost all workers have some of their income taxed by the Social Security program. However, the employee actually pays only half of the Social Security tax; the other half is paid by the employer. If a company pays two people to each work 40 hours a week at $125,000 a year then the company owes the government slightly more than $7,300 for each person.

However, the Social Security tax applies only on income up to $118,500. Earnings above this level are not taxed by Social Security. If the company were able to combine the two jobs and get just one person to work 80 hours a week at $250,000, it would save about $7,300. Hiring one person for a high-wage, high-hour job boosts the company’s bottom line.

Moreover, companies experience other cost savings beyond Social Security by hiring one very highly paid person, compared to two people. For skilled workers almost all companies offer health care, dental plans and other benefits like life insurance. Top-of-the-line or Cadillac family medical care plans cost over $27,500 per employee. For every two jobs that are combined the company’s bottom line is boosted by the amount the company would have spent on health, dental, and life insurance plans.

Space is also a high cost for many companies, especially those located in major urban areas or in desirable locations like Silicon Valley. Class A office space goes for $100 a square foot per year in New York’s midtown, $60 a square foot in Boston, and $58 in San Francisco. A standard-size cubicle of 75 square feet will cost a company between $4,350 and $7,500 in these three cities before a single partition is locked into place. By combining jobs and boosting hours for each employee, companies can reduce the number of cubicles and save money on space rental. The reduction in cubicles also reduces the need for additional computers, phones, chairs, file cabinets, and other office equipment.

The case for more jobs having longer hours in the future is simple. But why will companies be forced to pay very high wages? Part of the reason is that, over time, work is growing more specialized.

The age of the generalist who is a jack-of-all trades is long over. Training for many jobs takes months, if not years. Sometimes this training is paid for by workers. For example, workers often get specialized college degrees or pay out of pocket for advanced training. Sometimes, this training is done by companies. Either way, because of the increasing complexity of work, companies are spending increasing amounts of time on training or on searching for the right candidate to handle the new hyper-specialized world.

When a company has either invested a lot of effort in training a worker or invested a lot of time in finding a worker with the correct skills, they often don’t want to lose them. A simple way to prevent labor turnover is to ensure they are paid more money than other companies are offering. If a company always pays more money than the competition, there is no monetary advantage for their employees to switch companies. Pay is the bribe that companies use to keep workers motivated and showing up day-in and day-out. As the world becomes more specialized, companies that need that specialized labor will keep raising that bribe to keep workers on board.

The impact on people

With this trend toward long hours and higher pay, what will be the impact on people? Research has identified reduced sleep, increased stress, less happiness, lower productivity, poorer health, and higher chances for injuring yourself and others when the workday expands—implications that can be dangerous in any job, be it specialized or not.

One recent study showed that lower-income workers who work two jobs sleep less than anyone. But Daniel Hamermesh, a professor of economics at the University of Texas at Austin and the Royal Holloway University of London, analyzed the most recent time-use data from the American Time Use Survey and found that higher-income people slept less than the poor. (He theorizes why the relationship between income and sleep seems so strong: The more you can earn, the more worthwhile it may seem to sacrifice sleep for work.)

With high salaries, overtired workers may be able to mitigate their exhaustion by hiring low-wage workers in precarious employment situations to clean their homes, cook their food, and do their chores. But the impact on family life and friendships is likely to be detrimental because money can’t buy love.

A hundred years ago labor organizers campaigned for a radical idea: the 40-hour workweek. We are now moving back in the opposite direction. Some workers now work 80-100 hours per week for high pay as a way to “pay their dues” and earn a senior position in a finance company or a law firm, until they they can achieve the seniority that gives them more leisure time. In the future, well-paid workers will continue to work these crushing hours for many years as companies strive to cut costs by combining jobs. At that point, the “Walking Dead,” won’t be just a television show about zombies but an even more appropriate term to describe masses of highly paid but sleep-deprived workers.