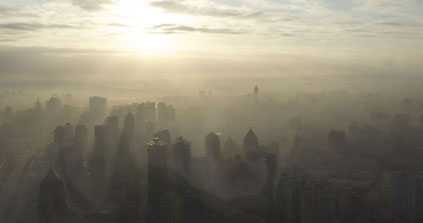 Two years ago, severe floods in central China triggered landslides, washed out roads and houses, and killed 200 people. And according to a recent study, air pollution may be partly to blame.

Particles in the air don’t cause strong storms, but they can redirect them. In the case of the Chinese floods, soot particles in the air prevented rain clouds from forming during the day. The dark particles of soot absorbed sunlight, which warmed up the air and kept the moisture in the air from condensing into clouds. The moist air moved into the mountains, where the cooler air condensed quickly, causing dramatic evening storms.

“We were amazed at the scale of the effect the pollution had,” Jiwen Fan, an author of the paper told Science. “Effectively it redistributed the precipitation from the wide area of the basin into the mountains.”

When the rain finally fell in the mountains, it fell faster and harder than it would have normally, in an area with steep slopes.

There have been other instances of air pollution causing severe natural disasters. A study published earlier this year found that smoke from wildfires had the potential to make tornado outbreaks in the United States more intense.

Researchers are still trying to figure out the exact link between air pollution and storms. The effects of air particles on weather seem to vary based on the type of air particle, the landscape, and many other factors. But these studies do provide another incentive for governments meeting at this winter’s Climate Change conference in Paris.