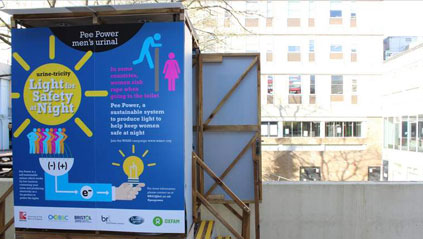 A prototype toilet which uses urine to generate electricity has been launched on a UK university campus.

The working urinal has been installed on the University of the West of England’s campus in Bristol, and students and staff are being encouraged to use it.

Microbial fuel cell stacks convert the urine into power, as microbes feed on urine for their growth.

It is hoped that the technology will be used to help light cubicles in international refugee camps, where people are at risk of rape and sexual assault in dark toilets.

Research lead Professor Ioannis Ieropoulos said: “(It is) in effect a system which taps a portion of that biochemical energy used for microbial growth, and converts that directly into electricity – what we are calling urine-tricity or pee power.

“This technology is about as green as it gets, as we do not need to utilise fossil fuels and we are effectively using a waste product that will be in plentiful supply.”

The functioning toilet is the result of work with Oxfam.

The charity’s head of water Andy Bastable said: “This technology is a huge step forward. Living in a refugee camp is hard enough without the added threat of being assaulted in dark places at night. The potential of this invention is huge.”