HIV, Syphilis Tests? There's an App for That

Home » Future » HIV, Syphilis Tests? There’s an App for That 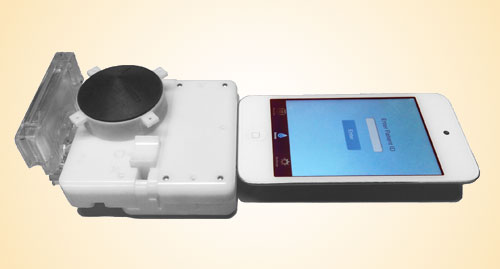 There are gizmos that let your smartphone read credit cards, sync with your fitness wristband and even function as a TV remote control. Now you can add “run an HIV test” to the list.

A device invented by biomedical engineers at Columbia University turns a smartphone into a lab that can test human blood for the virus that causes AIDS or the bacteria that cause syphilis. The device is a dongle that attaches to the headphone jack, and requires no separate batteries. An app on the phone reads the results.

The dongle contains a lab on a chip. It consists of a one-time-use cassette — which has tiny channels as thin as a human hair — and a pump, which is operated by a mechanical button and draws blood from an inlet through the channels.

Once the blood is inside the device, it meets chemicals that react with markers for HIV and syphilis. This kind of test is called an enzyme-linked immunosorbent assay (ELISA), and is considered one of the best methods for diagnosing diseases, said Samuel Sia, an associate professor of biomedical engineering at Columbia, who led the research. [7 Devastating Infectious Diseases]

The blood changes the color and opacity of the chemicals (formally speaking, the solutions’ optical depth changes). Then, LED lights shine through the mixture to a set of photocells, which read the change in the color and opacity and send the data to the app. The whole process takes 15 minutes.

The device requires little power because the pump is hand-activated — the person who wants to conduct the blood test presses a plunger to draw the blood. The current to run the LEDs comes from the phone’s audio signal, according the researchers’ report of their device, which is published today (Feb. 4) in the journal Science Translational Medicine. 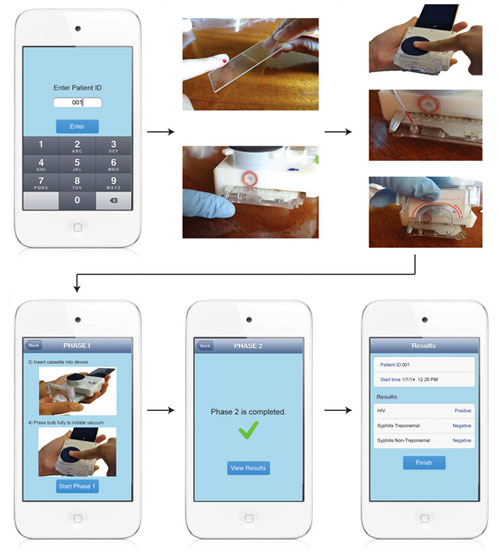 The test results can be read by anyone with little prior training in lab technique necessary, the researchers said.

The researchers got the idea for the device when examining the costs and the logistical difficulties of getting equipment for HIV testing to rural areas or developing countries. Lab-on-a-chip devices have become more common in the last several years, but few are designed for use by people who don’t have a lot of training, and the devices themselves tend to be expensive and customized.

“People [developing such devices] were not focused on usability,” Sia said. “If you have a test that takes 20 steps and a laboratory staff, that’s not going to make an impact on society.”

Although sophisticated lab technology is scant in the developing world, smartphones are being adopted quickly. The research firm Informa UK projects that the number of smartphone connections, a close proxy for users, in Africa will grow to 204 million in 2015, from 154 million in 2014.

That kind of growth makes smartphones a natural target for the kind of technological development involved in the blood-testing device, the researchers said.