Farms of the Future: Forget Sun and Soil, It's All About LED

Home » Future » Farms of the Future: Forget Sun and Soil, It’s All About LED 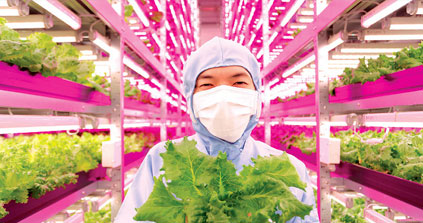 For centuries, farmers have been dependent on weather, short growing seasons, fluctuating supply and demand cycles, and a host of environmental factors that make the farming business one of luck as much as agricultural acumen. Combined with the world’s growing population and the increasing scarcity of farmland, new strides in indoor LED farming are becoming less the stuff of science fiction and more of a real world necessity. Let’s take a look at how the world’s oldest industry is getting a radical 21st century update with a little help from light-emitting diodes.

Philips recently opened its GrowWise City indoor farm in the Netherlands, a 2,500-square-foot indoor farming facility powered by LED lights. Images of these highly controlled gardens are surprisingly beautiful, as the vibrant green vegetables contrast with stainless steel racks and purple LED lights. This is not Dorothy’s farm in Kansas by any stretch of the imagination.

As Philips’ 10,000 researchers experiment with creating “LED Light Growth Recipes,” the goal of providing farmers with a large scale produce infrastructure that requires no sunlight or soil is getting closer every day. While this all sounds pretty out there, consider the possibilities: plants grown in a controlled environment, effectively sealed from contaminants that frequently pervade crops from both the air and the ground, would be 100 percent organic and pesticide-free. The LED system is customizable, too, allowing settings for each individual plant to be controlled and adapted as needed. You can’t say that about Mother Nature. Currently Phillips is focusing on perfecting those light growth recipes for strawberries, leafy green veggies, and herbs, with potatoes and wheat in the pipeline.

In a press release, Philips Global Director of City Farming, Gus van der Feltz, defined GrowWise City’s goals as lofty but potentially world changing: “Our aim is to develop the technology that makes it possible to grow tasty, healthy and sustainable food virtually anywhere. The research we are undertaking will enable local food production on a global scale, reducing waste, limiting food miles and using practically no land or water.” If Philips can actually pull off these LED Light Growth Recipes and create accessible technology to grow veggies year round in cities that don’t have access to unpolluted farmland, we will be living in a world that our farming forefathers could not have imagined. It will be a better world, with fresh food, even if adjusting to the idea of high tech cornfields is a bit of a mind-bender.

Meanwhile in Japan, lettuce has gone wild. GE designed LED lights are now powering indoor farming facilities that are growing 10,000 leafy green heads a day. Located in eastern Japan, Miyagi Prefecture was badly damaged by the 2011 tsunami and earthquake–a prime example of why we need to develop alternative farming methods to the whims of our increasingly temperamental plane. Determined to try something different, plant physiologist Shigeharu Shimamura founded an indoor farming company Mirai and turned a former semiconductor factory into the world’s largest indoor farming facility powered by LEDs. Roughly the size of half a football field, the farm uses 17,500 LED lights spread over 18 cultivation racks that reach 15 levels high. Considering that the farm just opened in July, it’s pretty impressive that it’s already producing 10,000 lettuce heads a day.

If that seems like a freakishly high output, it is: the potential for LED farms is not just in their pesticide-free controlled environment, but also in their ability to speed up the life cycle of a plant, effectively altering the day and night pattern than has governed agriculture for millennia. Shimamura boasts of his farm growing lettuce full of vitamins and minerals two-and-a-half times faster than an outdoor farm, while also cutting down discarded produce waste from a regular farm’s 50 percent to just 10 percent. The farm also uses just 1 percent of the water used by outdoor farms. These are some pretty efficient salads.

GE and Mirai are expanding their efforts next to developing “plant factories” in Hong Kong and Russia. If the Netherland’s GrowWise City and Japan’s lettuce factory are an accurate prediction of the future of farming, it’s looking bright, juicy, and out of this world.