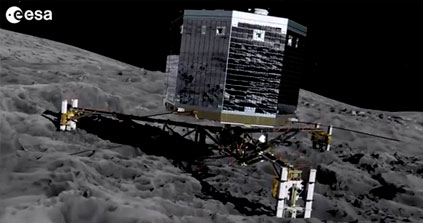 European scientists are confident they’ll soon be able to start experiments on the surface of a speeding comet after a spacecraft lost for months on its surface suddenly “woke up” this week.

Barbara Cozzoni, lander control center engineer for the German Eerospace Center, told reporters at the International Paris Air Show that information gleaned from the Philae lander’s brief transmissions on June 13 and 14 had begun to be deciphered.

She says scientists got “only good things,” adding all four of Philae’s solar panels are collecting energy and the spacecraft’s internal temperature was in the correct range.

Mark McCaughrean, a senior ESA adviser, says scientists need a stable communications link with the spacecraft to begin experiments not just about the comet but about the origins of life on Earth.