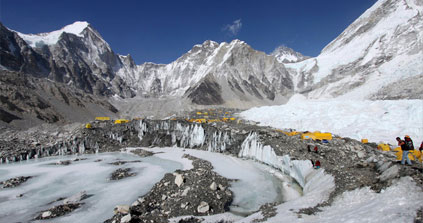 By the end of this century, the landscape around Mount Everest may drastically change. As the planet continues to warm, the Everest region of Nepal could lose most of its glaciers, according to a study published in the journal The Cryosphere.

“We did not expect to see glaciers reduced at such a large scale,” said Joseph Shea, a glacier hydrologist at the International Center for Integrated Mountain Development in Nepal and lead author of the new report. “The numbers are quite frightening.”

To arrive at these findings, Dr. Shea and his colleagues used a computer model for glacier melt, accumulation and redistribution. They customized the model with data on temperature and precipitation, measurements from the field and remote-sensing observations collected over 50 years from the Dudh Koshi basin, which includes Mount Everest and several of the world’s other highest peaks.

The model took into account how much mass glaciers gain from snowfall, as well as the way that mass is redistributed by continual downward movement. The researchers applied the model to eight future climate scenarios, from moderate emissions reductions to none at all.

The results do not bode well for the glaciers around Everest. Even if emissions are reduced by midcentury and rain in the region increases, the model predicts that the majority of the glaciers will probably disappear by 2100.

What this would mean for the region is unclear. The mountains are culturally and economically important for the Nepalese, but clearing them of glaciers could make them safer for mountaineers.

The Khumbu icefall, an unstable glacier field, for example, is considered one of the deadliest sections of the route up Mount Everest.

While the model’s simulations corroborate field observations, Dr. Shea said that computer models could be plagued by uncertainties and their predictions were never exact.

“This is a first step, not a final answer on what will happen,” Dr. Shea said. “But it does show that even a modest step to curb emissions now might help reduce the amount of glacier loss we’ll likely see in the future.”