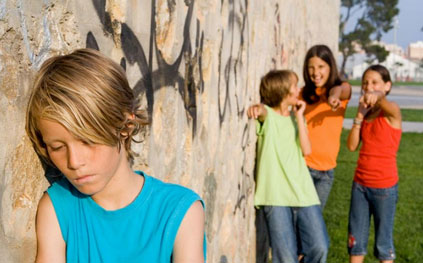 Being bullied during childhood may have even graver consequences for mental health in adulthood than being neglected or sexually abused, according to the first-ever study to tease out the effects of peer abuse from childhood maltreatment.

Children in the study who had been bullied by their peers, but didn’t suffer maltreatment from family members, were more likely to have depression and anxiety in adulthood than children who experienced child abuse but weren’t bullied, according to researchers from the United .States. and United Kingdom.

One in 3 children worldwide reports being bullied, Dieter Wolke, a professor of psychology at the University of Warwick in Coventry, England, and his colleagues note in their report, published today (April 28) in the journal Lancet Psychology.  Studies have shown that victims of bullying have impaired stress responses and high levels of inflammation, as well as worse health and less workplace success as adults, the researchers said.

In the new study, Wolke and his colleagues looked at data on 4,026 children from the Avon Longitudinal Study of Parents and Children (ALSPAC) in the United Kingdom and 1,420 children participating in the Great Smoky Mountains Study in the United States. The ill effects of any type of child maltreatment — including sexual abuse, physical abuse and neglect — on mental health and physical health are well-documented. So the researchers wanted to know whether victims of bullying were at risk of mental health problems because they may have also experienced maltreatment, or whether being bullied itself was linked with greater risk of mental health problems.

In the U.K. study, investigators looked at whether children were maltreated between ages 8 weeks and 8.6 years, based on parent reporting. Tand then the children themselvesreported whether they were bullied at ages 8, 10 and 13. In the U.S. study, children and their parents participated in annual interviews when the children were 9 to 16 years old. The researchers followed up when study participants were from 18 up to 25 years old, and assessed them for depression, anxiety, and self-harm and suicidality.

Bullying may be more scarring than child maltreatment because while society recognizes child abuse as a serious problem, and supports its victims, people just don’t see bullying the same way, Wolke said. “There’re still people out there who think that bullying is a normal rite of passage — you go through and toughen up, etc.,” he said.

But bullying leaves people with poor self-esteem and a lasting sense of distrust of other people, he told Live Science. “Being socially excluded and being a social outcast is about the worst stress that we can experience, more than other pains.”

Although people are becoming more aware of how harmful bullying can be, efforts in the United .States. to tackle the problem are spotty, said William Copeland, an associate professor of psychiatry at Duke University Medical Center in Durham, North Carolina, who helped conduct the study. “I think it’s often the case that children that are bullied are not always supported in that, and told to deal with it themselves,” Copeland said.

And in fact, this lack of support and validation could further exacerbate the harmful consequences of bullying, he said.

“If someone’s maltreated, we tend to validate them, to tell them that it’s not their fault,” he said. “With bullying, it’s sometimes the case that the response is a lot less supportive, more of a shrug.”

Nevertheless, most people who are victims of child abuse or of bullying by peers go on to be healthy adults, and Copeland and his colleagues want to find out why. “We really want to better understand how to predict resilience in the face of these challenges,” he said.

Still, he said, “The best thing we can do is try to prevent these things from happening in the first place.”