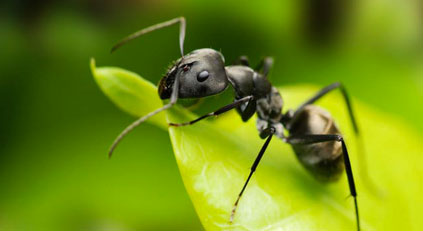 Much like human farmers, fungus-farming ants meticulously maintain their subterranean gardens. They regularly fertilize, weed and tend to their crops.

Now, researchers have discovered that one primitive species cultivates a kind of fungus that is entirely domesticated.

“These ants make their living by being farmers, and they are absolutely dependent on this fungus,” said Ted Schultz, an entomologist at the Smithsonian Institution. He and his colleagues will describe their findings in a coming issue of The American Naturalist.

Apterostigma megacephala was first described in 1999, based on four specimens found in Peru and Colombia. Ten years later, researchers discovered its nests in the eastern Amazon region of Brazil and realized that the ants cultivate a type of fungus that grows only in its nests and those of a species of leaf-cutter ants.

The fungus, Leucoagaricus gongylophorus, evolved only two to eight million years ago. DNA sequencing shows that the ant belongs to an ancient lineage that dates back 39 million years.

How and when the species got hold of the fungus remains a mystery, Dr. Schultz said. The leaf-cutter ant that cultivates the fungus evolved more recently, about 12 million years ago.