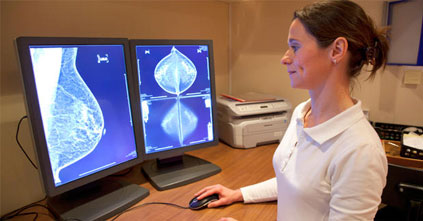 A new 3-D technology known as tomosynthesis has been shown to detect 40 percent more breast cancers than mammography, while also lowering the radiation dose.

Breast cancer is the most common type of cancer in women worldwide. More than 1.7 million cases were diagnosed in 2012, with half a million deaths in the same year. Tomosynthesis detects 40% more breast cancers than traditional mammography does, according to a major screening study from Lund University, Sweden. This is the first large-scale study to compare the screening method with regular mammograms. The new 3-D X-ray technique is also more comfortable for women, as breast compression is halved. A total of 7,500 women aged 40–74 took part in the first half of the study, which formed the basis for the findings.

“We see a change as inevitable. Breast tomosynthesis will be introduced, it is just a question of when and on what scale,” explains Sophia Zackrisson and Kristina Lång, radiologists at Skåne University Hospital in Malmö and researchers at Lund University.

Breast tomosynthesis works on the same principle as tomography. This means that X-ray images of the breast are acquired from different angles, which can then show multiple thin layers of the breast. This is compared with a traditional mammography, where all the breast tissue is reproduced in a single 2-D image, which can hinder the early detection of tumours.

The new technique also reduces discomfort and pain, because the breast does not have to be compressed as firmly as in the current examination technique. This could lead to higher levels of participation in future screening programmes. Among the other advantages are lower radiation doses than in traditional mammography, and the ready availability of the equipment on the market, which would facilitate a transition.

However, there are a few challenges remaining before the method can be introduced on a large scale. As with other screening methods, there is a risk of overdiagnosis (in mammography screening, the figure is 10–20 per cent). The researchers do not know what that number is for tomosynthesis, and further studies are needed to investigate the rate of overdiagnosis with tomosynthesis.

The study found that there was an increase in the recall rate, meaning more healthy women with benign lesions were recalled for further testing. This is a major drawback in screening, says Kristina Lång, as it can cause unnecessary psychological stress.

The ongoing research will also look at costs. Breast tomosynthesis is a somewhat more expensive technique.

“We see five to ten years from now as a possible timeframe for the large-scale introduction of the technique. There is also an aspiration for more personalised screening, and breast tomosynthesis could therefore be one of several methods used”, concludes Sophia Zackrisson.