3 Austrians Get Bionic Hands After Amputation 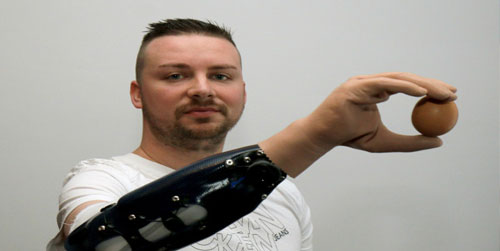 Three Austrians have replaced injured hands with bionic ones that they can control using nerves and muscles transplanted into their arms from their legs.

The three men are the first to undergo what doctors refer to as “bionic reconstruction,” which includes voluntary amputation, transplantation of nerves and muscles and learning to use faint signals from them to command the hand.

Previously, people with bionic hands have primarily controlled them with manual settings.

“This is the first time we have bionically reconstructed a hand,” said Dr. Oskar Aszmann of the Medical University of Vienna, who developed the approach with colleagues. “If I saw these kinds of patients five to seven years ago, I would have just shrugged my shoulders and said, ‘there’s nothing I can do for you.'”

He said that while some patients might be candidates for a hand transplant, that has its own complications, including having to take anti-rejection medicines for the rest of their lives.

Aszmann and colleagues describe the cases of the three men in a report published online Wednesday in the journal Lancet. The men decided on amputation only after having the bionic hand strapped onto their injured hand, to see how the robotic one might function.

For Milorad Marinkovic, 30, who lost the use of his right hand in a motorbike accident more than a decade ago, the bionic hand has allowed him to hold things like a sandwich or bottle of water — and more importantly, to play with his three children.

“I can throw things, but it is harder to catch a ball, because my right hand is still not quite as quick and natural (as my left),” said the Vienna based-clerk.

Dr. Simon Kay, who authored an accompanying commentary and performed Britain’s first hand transplant, said there would always be major limits to bionic hands, pointing out that the brain has thousands of ways to send messages to the human hand but that a robotic prosthetic can’t handle such complexity.

“The question is always going to be: how do we get the message from the mind to the metal?” he said.

Patients like Marinkovic, however, have few complaints about the bionic hand, which proved especially popular with his son. When he first got the device, his son, then 4, would put on the bionic hand and proudly walk around with it, telling the other kids in his kindergarten class that “my father is a robot.”

Marinkovic says using his bionic hand is nearly as natural as using his uninjured hand.

“I can do almost everything with it. I just don’t have any feeling in it.”

An unrelated study published last year gave patients some feeling in a prosthetic hand by relaying signals to the brain in a temporary experiment and other replacement hands can do things like grip objects but are controlled externally.

Aszmann estimated the new procedure costs around 30,000 euros ($33,960). The study was paid for by groups including the Austrian Council for Research and Technology Development and a laboratory which receives funds from Otto Bock, maker of the prosthetics used.