Wireless routers could spy on your breathing and heartbeat

Home » Future » Wireless routers could spy on your breathing and heartbeat 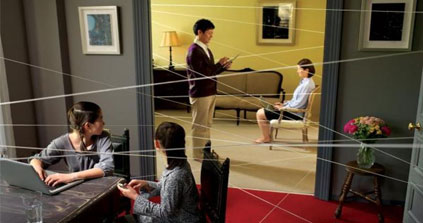 It happens the moment you walk in: without you being aware of it, an undercover system discreetly records your breathing and heartbeat. Welcome to the Katabi Lab, part of the Computer Science and Artificial Intelligence Laboratory at the Massachusetts Institute of Technology.

Called Vital-Radio, the system needs no sensors attached to the body, yet is nearly as accurate as conventional methods. Its measurements are wireless and even work through walls, so can keep tabs on your vital signs as you watch TV in the lounge or read or sleep in the bedroom. The team behind it believe it could be used to monitor and improve patient health in hospitals and at home.

“Breathing and heart rate would be interesting in hospitals if you want to monitor people without having things on their body,” says team member Fadel Adib. But the system could have a more surprising application: inferring our emotional state. What’s more, it could be built into a home Wi-Fi router, making it a hub not just for internet connections but also for collecting health data.

Vital-Radio works like a bit like radar: it transmits using a part of the radio spectrum similar to that used for Wi-Fi, then watches the reflected signals for imprints that indicate life. It also measures how long it takes the reflected wave to return – its “time of flight”. Each object in the vicinity, people included, will reflect the signals with a slightly different flight time depending on distance from the antenna.

The system then analyses the signals for the telltale signs that they bounced off a human – usually modulations that indicate movement. The rising and falling of our chest creates a distinct signature, and even the pulse in our neck, imperceptible to the eye, can be seen in the reflected signals. The team presented Vital-Radio earlier this week at the CHI computer conference in Seoul, South Korea.

Although the obvious applications lie in remote health monitoring, the physiological signals the system picks up often betray something that computer scientists are increasingly interested in – our emotions.

Call centres already use software to “read” how callers feel from their tone of voice, helping their workers make decisions. Vital-Radio could do a similar thing for the technology we interact with, all without needing us to don any extra gadgets.

A modified Wi-Fi router incorporating the system might tell our laptop that the movie we’re watching is calming us down, prompting the laptop to hold off displaying alerts, except for truly urgent matters. Smart lighting or music systems could change their hue or the music they play to match or moderate our mood.

Adib says the group is honing the system to the point where it can monitor a fetus’s heartbeat inside its mother. It may one day even be able to monitor the heartbeat in detail, acquiring data comparable to an electrocardiogram without the need for a hospital visit.

The biggest challenge for systems like Vital-Radio, according to Changzi Li of Texas Tech University in Lubbock, is how to deal accurately with the fact that people don’t sit still. “A heartbeat is 1 millimetre or smaller. Any random body motion could be much larger than the signal you want to capture,” says Li.

For this reason, Vital-Radio doesn’t try to monitor a person’s heart and breath rate while they wander about. But the technology it relies on can be used to track you as you move around the house, for instance. It can also track specific gestures and body language. A home with the system installed and connected to the lighting system would, for example, let residents control lights with a wave of their arm, much like using a Kinect can.

“There’s going to be a lot of applications,” says Li. “Not just in home but hospitals too. If the technical problem is solved, then the first hit will be in routine health monitoring.”