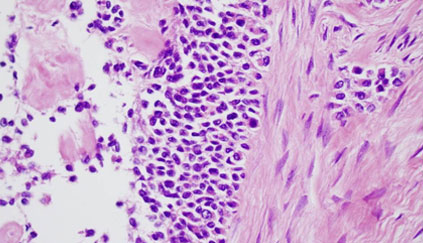 Performing genetic tests on cancer tumors without comparing the results with patients’ normal tissue could lead to inaccurate diagnoses and poor treatment decisions in nearly half of all patients under certain circumstances. This unexpected conclusion comes from a study of more than 800 people published in the April 15 Science Translational Medicine and underscores how complicated the genetic testing of tumors is becoming as well as how careful clinicians must be in interpreting the results. Currently, most genetic pathology tests are performed on tumor samples only and do not include comparisons with DNA taken from normal tissue.

In the early days of genetic testing of cancerous growths—less than a decade ago—physicians searched for just a handful of mutations that were virtually guaranteed to be important in tumor development. If the tumor contained one of these so-called hotspot mutations, such as a change in the 12th or 13th letter (codon) in the DNA of the K-Ras gene, you were pretty safe in basing any decisions about treatment on that result.

As the technology used for genetic testing improves (the latest approaches are collectively referred to as “next-generation sequencing”) and the costs decline, however, more and more genetic alterations are being considered “actionable” because they occur in a potentially cancer-causing gene. But these mutations could also be misleading because they may reflect normal random variation. Under these circumstances, the genetic change does nothing to interfere with the usual activity of the gene and therefore does not lead to malignant growth. Such false positives could fool unsuspecting doctors and their patients into choosing certain chemotherapy drugs—with all their attendant side effects—that won’t have an effect on the tumor.

Researchers at Johns Hopkins University School of Medicine and the Personal Genome Diagnostics testing company looked at genetic test results from 815 patients who suffered from 15 different kinds of cancer—including colorectal, breast and pancreatic tumors. As a matter of longstanding routine, Hopkins clinicians ask for genetic results from both a patient’s tumor as well as his or her normal tissue when performing next-generation sequencing. “When we analyzed our first cancer genomes about a decade ago, that’s how those studies were done,” says Victor Velculescu, a co-director of the Sidney Kimmel Comprehensive Cancer Center at Hopkins and a co-founder of Personal Genome Diagnostics. Although it was scientifically reasonable to conduct genetic tests only of tumor tissue when looking for hotspot mutations in those early days, Hopkins researchers ordered up genetic tests of normal tissue as well as a kind of double-check that they were on the right path. They continued the practice even as they started doing next-generation sequencing.

Most clinical genetic testing services, however, continued following the tumor-only procedures once they started adding next-generation sequencing to their repertoire. Velculescu suspected that following such a tumor-only process while expanding the number of genes that are tested was a mistake and decided to use the Hopkins data to see if his hunch was correct.

Velculescu and colleagues looked for alterations in 111 genes that are widely believed to be potentially involved in the development of cancers from the 815 patients. They found more than 100,000 different changes in those 111 genes from the patients’ tumors, with an average of just over 4.3 mutations in each person’s cancer (some people had as many as 29 distinct mutations in their tumors). Then they looked at a subset of patients to see how often the changes in tumor genes occurred in the patients’ normal tissue as well—an indication (although not proof positive) that the mutation was a normal variation and not a disease-causing one.

The result “was perhaps the greatest surprise of the study,” Velculescu said in a telebriefing. “If you look at these genes that are likely to be important for therapy, these so-called actionable genes, you find out about a third of these variants were false positives.” In other words, these particular mutations were found in both the malignant and the normal tissue, increasing the likelihood that they had nothing to do with what was driving the cancer growth in the first place; they were actually just “passenger” genes, if you will, along for the ride.

Because most cancer patients in the study had more than one such “false positive” mutation, nearly half of the group could have received incorrect information about their treatment options and future prospects had their doctors depended on genetic test results from the tumor samples only. (Because the Hopkins patients had genetic results from both tumor and healthy tissue they did not fall prey to such a problem.) “This sort of analysis and this comparison is very much part of what we think about in science as a control,” Velculescu said. “Whenever you do a new analysis—and every patient is obviously a new analysis—you need to have a control for that analysis. And this fundamental issue of having an analysis and a control for that analysis is essentially not respected if you do a tumor-only analysis—you don’t really have a control.” When it comes to next-generation sequencing of a growing number of potentially but not absolutely actionable genes, Velculescu continued, “the danger for a particular patient is that a physician will use these false positive changes not knowing they’re false positives to either guide therapy or place a patient on a particular clinical trial.”

In many cases, besides suffering unnecessary side effects, patients might also have to pay much higher medical bills. Some of the chemotherapy drugs that such false positive genetic test results might erroneously indicate should be tried include ruxolitinib for JAK2 mutations and everolimus for TSC2 mutations; both drugs cost $7000 or more for a month’s supply.

It won’t necessarily be that easy to add gene testing of normal tissue—also known as germline testing—to standard tumor testing. “The minute you open the germline box, you have a whole new set of ethics questions,” says George Demetri, a senior vice president for experimental therapeutics at Dana Farber Cancer Institute and a professor of medicine at Harvard Medical School, who was not involved in the study. Insurance companies might want that information to learn if you have any genetic predispositions to other diseases—possibly making you uninsurable, for example. Still, Demetri believes the Hopkins study is an important one. “It get backs to what level of genetic detail can we be certain about?” he says. “We still need to learn a lot more about what’s a valid cancer target.”