Speaking a second language may change how you see the world 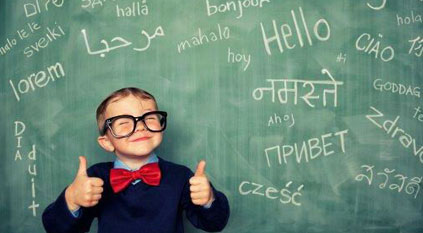 Where did the thief go? You might get a more accurate answer if you ask the question in German. How did she get away? Now you might want to switch to English. Speakers of the two languages put different emphasis on actions and their consequences, influencing the way they think about the world, according to a new study. The work also finds that bilinguals may get the best of both worldviews, as their thinking can be more flexible.

Cognitive scientists have debated whether your native language shapes how you think since the 1940s. The idea has seen a revival in recent decades, as a growing number of studies suggested that language can prompt speakers to pay attention to certain features of the world. Russian speakers are faster to distinguish shades of blue than English speakers, for example. And Japanese speakers tend to group objects by material rather than shape, whereas Koreans focus on how tightly objects fit together. Still, skeptics argue that such results are laboratory artifacts, or at best reflect cultural differences between speakers that are unrelated to language.

In the new study, researchers turned to people who speak multiple languages. By studying bilinguals, “we’re taking that classic debate and turning it on its head,” says psycholinguist Panos Athanasopoulos of Lancaster University in the United Kingdom. Rather than ask whether speakers of different languages have different minds, he says, “we ask, ‘Can two different minds exist within one person?’ ”

Athanasopoulos and colleagues were interested in a particular difference in how English and German speakers treat events. English has a grammatical toolkit for situating actions in time: “I was sailing to Bermuda and I saw Elvis” is different from “I sailed to Bermuda and I saw Elvis.” German doesn’t have this feature. As a result, German speakers tend to specify the beginnings, middles, and ends of events, but English speakers often leave out the endpoints and focus in on the action. Looking at the same scene, for example, German speakers might say, “A man leaves the house and walks to the store,” whereas an English speaker would just say, “A man is walking.”

This linguistic difference seems to influence how speakers of the two languages view events, according to the new study. Athanasopoulos and colleagues asked 15 native speakers of each language to watch a series of video clips that showed people walking, biking, running, or driving. In each set of three videos, the researchers asked subjects to decide whether a scene with an ambiguous goal (a woman walks down a road toward a parked car) was more similar to a clearly goal-oriented scene (a woman walks into a building) or a scene with no goal (a woman walks down a country lane). German speakers matched ambiguous scenes with goal-oriented scenes about 40% of the time on average, compared with 25% among English speakers. This difference implies that German speakers are more likely to focus on possible outcomes of people’s actions, but English speakers pay more attention to the action itself.

Bilingual speakers, meanwhile, seemed to switch between these perspectives based on the language most active in their minds. The researchers found that 15 Germans fluent in English were just as goal-focused as any other native speaker when tested in German in their home country. But a similar group of 15 German-English bilinguals tested in English in the United Kingdom were just as action-focused as native English speakers. This change could also be seen as an effect of culture, but a second experiment showed that bilinguals can also switch perspectives as fast as they can switch languages.

In another group of 30 German-English bilinguals, the researchers kept one language busy during the video-matching task by making participants repeat strings of numbers out loud in either English or German. Distracting one language seemed to automatically bring the influence of the other language to the fore. When researchers “blocked” English, subjects acted like typical Germans and saw ambiguous videos as more goal-oriented. With German blocked, bilingual subjects acted like English speakers and matched ambiguous and open-ended scenes. When the researchers surprised subjects by switching the language of the distracting numbers halfway through the experiment, the subjects’ focus on goals versus process switched right along with it.

The results suggest that a second language can play an important unconscious role in framing perception, the authors conclude online this month in Psychological Science. “By having another language, you have an alternative vision of the world,” Athanasopoulos says. “You can listen to music from only one speaker, or you can listen in stereo … It’s the same with language.”

“This is an important advance,” says cognitive scientist Phillip Wolff of Emory University in Atlanta who wasn’t connected to the study. “If you’re a bilingual speaker, you’re able to entertain different perspectives and go back and forth,” he says. “That really hasn’t been shown before.”

But researchers who doubt that language plays a central role in thinking are likely to remain skeptical. The artificial laboratory setting may make people rely on language more than they normally would, says cognitive psychologist Barbara Malt of Lehigh University in Bethlehem, Pennsylvania. “In a real-world situation, I could find reasons to pay attention to the continuity of an action and other reasons where I would pay attention to the endpoint,” she says. “Nothing says I have to be a bilingual to do that … It doesn’t mean language is the lens through which I see the world.”