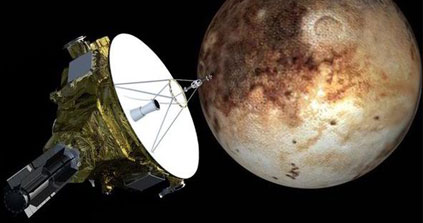 NASA is counting down the days – and seconds – until a long awaited “up close and personal encounter” with the dwarf planet Pluto.

New Horizons, the U.S. space agency’s “fastest spacecraft ever launched,” is just three months away from taking images of Pluto for the first time, after decades of observing the extent of the solar system from afar.

The New Horizons spacecraft, which has travelled more than three billion miles since its launch on Jan. 19, 2006, will pass Pluto and its five moons on July 14. The craft is equipped with cameras, plasma and dust detectors and spectrometers, which measure light for environmental and chemical properties.

“Scientific literature is filled with papers on the characteristics of Pluto and its moons from ground and Earth-orbiting space observations, but we’ve never studied Pluto up close and personal,” said John Grunsfeld, an astronaut and associate administrator of the NASA Science Mission Directorate in Washington, D.C., in a statement.

NASA says the spacecraft is now closer to Pluto than the Earth is to the sun— that is, separated by only 93 million miles.

NASA on Tuesday released the first-ever color image of Pluto and its largest moon, Charon, taken “on approach.”

The images show “little more than bright dots in the distance.” But the scientists manning New Horizons will use the images to orient the craft and ensure that it successfully arrives at a target distance of 7,750 miles from the Pluto’s surface.

“As New Horizons approaches its flyby of Pluto on July 14, it will deliver color images that eventually show surface features as small as a few miles across,” NASA said in a statement accompanying the photo.

The craft is designed to capture as much data as it can while it is on close approach to Pluto’s surface and send that information back to scientists on Earth before flying home.

“We have just one shot to make this work,” said Alice Bowman, New Horizons mission operations manager at the Johns Hopkins University Applied Physics Laboratory (APL) in Laurel, Maryland. “We’ve plotted out each step of the Pluto encounter, practiced it over and over, and we’re excited the ‘real deal’ is finally here.”

NASA in the early 2000s set the exploration of the outer stretches of the solar system, and in particular Pluto and Charon, as its top priority.

Pluto and its moons have been of interest to scientists exploring the possibility of life-supporting conditions outside of Earth. Pluto has a nitrogen-based atmosphere and an ice-rock interior thought to possibly hold its own ocean. Charon itself may also have an atmosphere or interior ocean, NASA said.