How Do Tesla's Home Batteries Work? 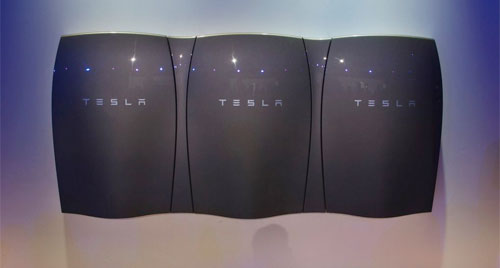 The idea is that homes and businesses powered by solar panels could harvest and store energy during the day that could be used to run homes at night, or be used as a backup during a power outage.

“Our goal is to fundamentally change the way the world uses energy,” the company’s founder, Elon Musk, said at a news conference April 30.

Although the exact technology involved in the battery, called Powerwall, is a closely guarded secret, it probably isn’t based on revolutionary concepts, said Jordi Cabana, a chemistry professor at the University of Illinois at Chicago who studies new battery materials.

“Just looking at the specs that they publicize, it doesn’t look very different – in terms of the cost – to what they’re putting in their cars,” Cabana told Live Science.

Tesla’s newly unveiled system includes the $3,500 Powerwall, a home-based battery pack that can store 10 kilowatt-hours of power. A hair dryer takes about 1 kW to run, while a stove takes several kW to run, so the new system could power a household for several hours, said Stephen Harris, a chemist at Lawrence Berkeley National Laboratory in California, who studies lithium battery technology.

The company is also planning to unveil a business-based battery-storage system, called the Powerpack, though the price for that system has not been released yet. Tesla is already taking orders for its residential system, but the products won’t ship until late summer, company representatives said at the news conference.

The boxes – which are about 33 inches (0.8 meters) wide, 51 inches (1.4 m) tall and 7 inches (17.8 centimeters) deep – are designed to be easy to install, and will connect to the Internet so that users can monitor their power usage.

The technology is probably the same or similar to that found in Tesla’s Model S car, experts say. Although companies are secretive about their technology, most scientists think the Model S uses a particular type of lithium-ion battery in which one layer of the battery, called the cathode, is made of a blend of nickel, manganese and cobalt oxide (NMC).

Lithium ions are interspersed throughout this layer, and when the battery is charged, an electrical current drives the lithium ions out of the cathode, into a fluid filled with electrically conducting ions, and into another layer, called the anode, which is made up of stacks of graphite. When the power stored in the NMC battery is used, it causes the lithium ions to drift back down into the cathode, Paul Shearing, a chemical engineer at University College London, previously told Live Science.

Different battery makers may tinker with the geometry or the particular blend of ingredients, but most researchers think this basic chemistry underlies the Tesla Model S’ battery pack, Cabana said.

The Powerwall can store less power than the typical Tesla Model S battery, based on the product specifications. In addition, cars are powered by direct current, whereas houses use alternating current, which means the new battery packs likely include some kind of converter, Cabana said.

But while the new technology may not be completely different from other battery packs, they could transform the market for home power storage.

The idea of storing power from solar panels isn’t new, but most people typically had cheaper, smaller-capacity batteries that weren’t meant to continuously power an entire home, Cabana said. And some companies have experimented with developing industrial-size batteries — essentially an entire building that is one giant battery, he said.

On the other hand, most people who use solar panels to help power their home simply sell their excess electricity back to the power grid during the day, Harris said.

And in the case of a power outage, natural-gas backup generators are typically a lot cheaper, though the gas itself costs extra money. So, from a purely economic standpoint, home-based batteries don’t yet make sense, Harris said.

On the other hand, Tesla excels at design, marketing and packaging. And similar to companies like BMW, Tesla has carved out a niche with its cars as futuristic luxury vehicles with a certain cachet, Harris said.

But while cars have long been status symbols, “I don’t know how many midlife-crisis men are going to try to impress the ladies by buying a Tesla battery,” Harris said.