Dirty farm air may ward off asthma in children 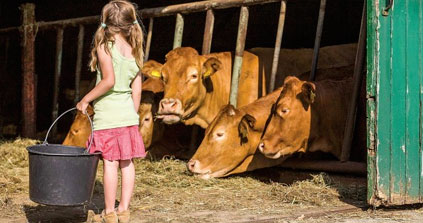 For researchers trying to untangle the roots of the current epidemic of asthma, one observation is especially intriguing: Children who grow up on dairy farms are much less likely than the average child to develop the respiratory disease. Now, a European team studying mice has homed in on a possible explanation: Bits of bacteria found in farm dust trigger an inflammatory response in the animals’ lungs that later protects them from asthma. An enzyme involved in this defense is sometimes disabled in people with asthma, suggesting that treatments inspired by this molecule could ward off the condition in people.

The study, published on page 1106, offers new support for the so-called hygiene hypothesis, a 26-year-old idea that posits that our modern zeal for cleanliness and widespread use of antibiotics have purged the environment of microorganisms that once taught a child’s developing immune system not to overreact to foreign substances. “This gives us a tantalizing molecular mechanism for understanding the epidemiological evidence,” says pediatric immunologist Stuart Turvey of the University of British Columbia in Vancouver, Canada, who was not involved with the new work. But others caution that the finding is probably far from the only explanation for why early exposure to microbes can make kids less allergy-prone.

About 20 studies in Europe and elsewhere have found that children raised on farms have relatively low rates of allergies and asthma. Some researchers suspect a key reason is that the kids breathe in air full of molecules from the cell wall of certain bacteria, called lipopolysaccharides for their fat-sugar structure. Also known as endotoxins, these fragments—from dying bacteria in cow manure and fodder—cause a temporary low state of inflammation in the lungs that somehow dampens the immune system’s response to allergens, the thinking goes.

Pulmonologist Bart Lambrecht and  immunologist Hamida Hammad of Ghent University and Flanders Institute for Biotechnology in Belgium and their collaborators wanted to probe the mechanism for endotoxins’ protective effect. They first showed that injecting the molecules into the noses of 6- to 12-week-old mice every other day for 2 weeks protects the rodents from developing asthma later, in response to dust mites. In the endotoxin-exposed mice, the epithelial cells lining the lungs made lower levels of proinflammatory molecules called cytokines when they encountered the dust mites; the mice also had fewer dendritic cells, the immune sentinels activated by cytokines.

An enzyme made by the epithelial cells, called A20, seemed to play a role in reducing these inflammatory responses. In mice engineered to lack the gene for A20 in their lung epithelial cells, endotoxins did not protect the animals from asthma. The team got similar results when they repeated the mouse experiments with farm dust, which includes not just endotoxins but other potentially inflammatory fragments from bacteria, fungi, and plants as well.

The Ghent team then tested bronchial cells from healthy people and found that exposure to endotoxins lowers the levels of the same inflammatory molecules studied in the mice. The levels didn’t drop as much in cells from people with asthma, and their cells also made less A20 protein. Finally, the researchers found that among nearly 500 farm children, those carrying a mutation that lowers A20 activity were five times more likely to develop asthma.

Until now, Lambrecht says, most explanations for the hygiene hypothesis assumed it acts directly on the immune system’s T cells. The new finding shows that with endotoxins, “it’s not happening in the immune system. It’s in the structural cells of the airway,” Lambrecht says. “We need this environmental exposure to cool down the epithelium so it knows what’s dangerous and not dangerous.” He points out that A20 plays a similar restraining role in the gut of a newborn, helping it tolerate the beneficial microbes that contribute to digesting food. The new study suggests that a drug that boosts A20’s activity could help protect children with a family history of asthma from developing the disease, Lambrecht says. (Dosing children with endotoxins is risky because the mechanism is apparently finely tuned; large exposures promote asthma.)

Others who study the hygiene hypothesis caution that the newly uncovered mechanism does not entirely explain the protective effect of dairy farm life. Drinking unprocessed milk also seems to ward off asthma in kids, points out Gary Huffnagle of the University of Michigan, Ann Arbor—and that effect is unlikely to involve the lung epithelium. What’s more, endotoxin levels are not that much higher on farms than in cities, suggesting “it’s too simple an answer,” says asthma genetics researcher William Cookson of Imperial College London, who thinks changes in living microbial communities in the lungs and gut may be just as important.

Harvard University immunologist  Richard Blumberg would also like to see the Ghent team show that the protective response lasts from birth into adulthood— experiments that Lambrecht’s group is now planning. For now, says Blumberg, the new study is “another important layer of our community’s search to understand the biology behind the hygiene hypothesis.”