Bill Gates: The world's next epidemic could be much worse than Ebola, and here's what we need to invest in to stop it

Home » Future » Bill Gates: The world’s next epidemic could be much worse than Ebola, and here’s what we need to invest in to stop it 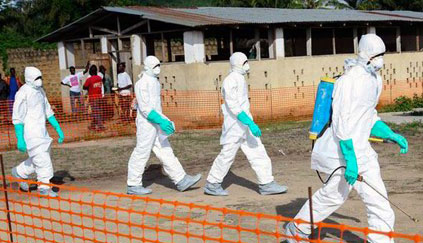 The West Africa Ebola outbreak has killed more than 10,000 people since fall 2014, but in a new research paper, Bill Gates warns that the next epidemic will probably be much worse, especially if we don’t invest in better ways to stop disease from spreading.

Ebola can only travel through physical contact with people already showing symptoms — other diseases are much more infectious because they can spread through the air.

“Even if the system we have today had worked perfectly for Ebola, it would fail to contain a more infectious disease,” Gates writes.

The world is much more prepared for war than a massive epidemic, he writes. Countries that are part of the North Atlantic Treaty Organization (NATO) are frequently running exercises to work out logistics for what to do if a world war breaks out, but the last serious simulation of an epidemic in the United States took place way back in 2001.

Gates recommends that, globally, investments need to be made in health systems and surveillance, human and other resources, and medical and public health tools.

“I believe that we can solve this problem, just as we’ve solved many others — with ingenuity and innovation,” he writes in a New York Times column summarizing his paper.

The United Nations should “empower and fund a global institution” to coordinate the creation of a warning and response system, disease surveillance database, and more research on drugs, vaccines, and diagnostic tests.

It’s a huge undertaking, but the cost of not making progress is even higher.